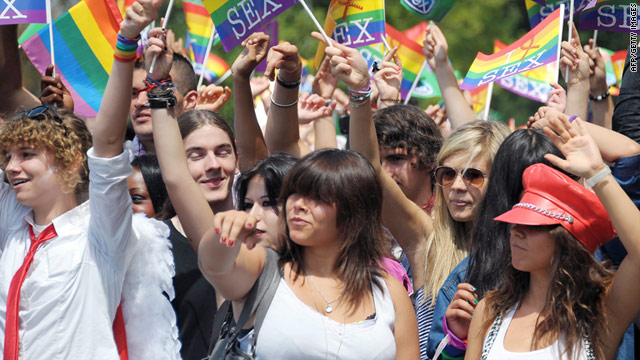 In what the U.S. State Department is calling a "historic step," the U.N. Human Rights Council in Geneva passed a resolution Friday supporting equal rights for all, regardless of sexual orientation.

The resolution, introduced by South Africa, is the first-ever U.N. resolution on the human rights of lesbian, gay, bisexual and transgendered persons.

It passed with 23 votes in favor, 19 opposed and three abstentions, amid strong criticism of South Africa by some African nations.

Suzanne Nossel, deputy assistant secretary of state for international organizations, told CNN, "It really is a key part in setting a new norm that gay rights are human rights and that that has to be accepted globally."

"It talks about the violence and discrimination that people of LGBT persuasion experience around the world," she said, "and that those issues ... need to be taken seriously. It calls for reporting on what's going on, where people are being discriminated against, the violence that is taking place, and it really puts the issue squarely on the U.N.'s agenda going forward."

Divided opinion continues among some countries about whether the time has come to take up gay rights in the U.N. forum, Nossel said, "so this resolution is really significant as far as gaining widespread support for doing just that."

Former Soviet spy Oleg Kalugin, who headed KGB operations in the United States in the 1970s and later left Russia to live in America, told CNN Tuesday he is "amazed" that Moscow is engaging so heavily in espionage against Washington.

Reacting to the recent arrests of 11 alleged Russian spies, Kalugin said that getting the type of information the FBI says the operatives collected "does not require such a massive assault" against the United States.

"I am amazed," he said. "It reminds me of the worst years of the Cold War." END_OF_DOCUMENT_TOKEN_TO_BE_REPLACED

[Updated at 1:47 p.m.] Secretary of State Hillary Clinton announced the United States will give $60 million to the U.N. Relief and Works Agency for help to Palestinian refugees on Friday, a move designed to improve the lives of 4.7 million people.

The aid comes as the United States and the international community struggle to provide increased aid to Palestinians living in Gaza. In May, in a deadly clash aboard a flotilla carrying aid to Gaza, Israeli forces killed nine activists. Israel subsequently has said it will ease restrictions on aid going into Gaza but will not end its naval blockade.