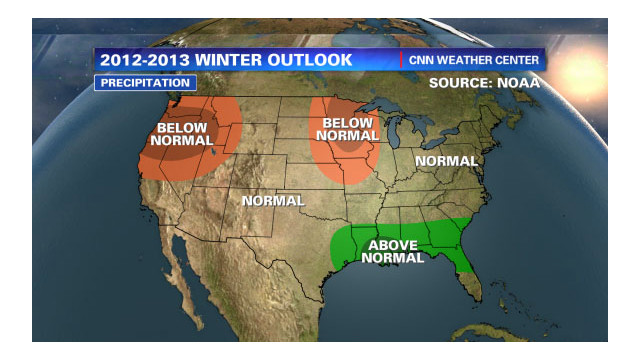 This winter might not be very helpful to the United States’ precipitation-starved Plains and West.

NOAA’s winter outlook for the United States says these areas may receive normal precipitation from December through February. Parts of these areas - along with much of the Pacific Northwest and the upper Midwest - are expected to see less than normal precipitation. The only areas forecast for a better-than-normal chance of rain are across the Gulf Coast.

Nearly 75% of the country is either in drought or abnormally dry.

“The drought will likely persist at least through the winter”, according to Deke Arndt, chief of climate monitoring at NOAA’s National Climate Prediction Center.

Meanwhile, the western half of the country could be shivering less severely than usual. Temperatures are forecast to be above normal through the winter months over the Plains and Rockies, with only Florida expecting below-normal temperatures.

The Atlantic Ocean may have a couple more named storms this year than the National Oceanic and Atmospheric Administration initially predicted, the group said Thursday.

NOAA now predicts 12 to 17 named storms, up from the nine to 15 it predicted shortly before the June 1 start of hurricane season. Six named storms, including the current Tropical Storm/Hurricane Ernesto, have been produced so far.

For the Atlantic Ocean, a normal season would produce 12 named storms (with top sustained winds of at least 39 mph), including six hurricanes and three major ones.

NOAA also adjusted its predicted hurricane range, to five to eight (up from four to eight). Two to three of those should be major hurricanes, meaning Category 3 (with maximum sustained winds of at least 111 mph) or higher, NOAA says.

END_OF_DOCUMENT_TOKEN_TO_BE_REPLACED 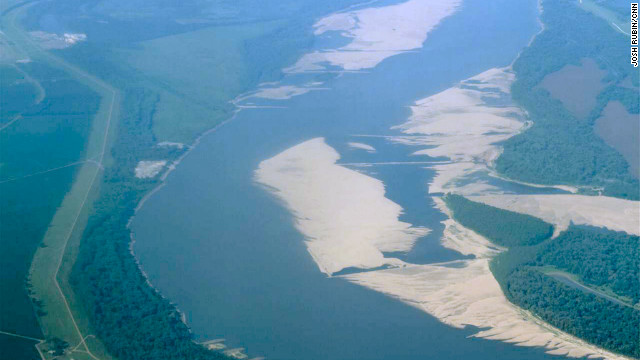 Dramatic images taken from NASA’s Terra satellite show the swollen river in late April of last year compared with images from early July this year. The expanse of the water was over 3 miles wide in parts of Missouri and Arkansas as levees were blown up in order to help protect the town of Cairo, Illinois from flood waters. The image taken July 2012 this year shows a much different story with the river less than a half mile wide in spots. 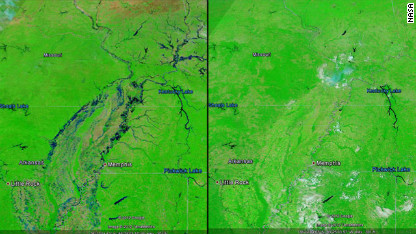 During the 2012 crop year, the U.S. Department of Agriculture (USDA) has designated 1,297 counties across 29 states as disaster areas, making all qualified farm operators in the areas eligible for low-interest emergency loans. And on Monday the USDA designated 39 additional counties in eight states as primary natural disaster areas due to damage and losses caused by drought and excessive heat.

A dozen states on Thursday were under some sort of heat advisory or warning, many of them over the worst-hit drought areas. The heat wave is expected to last through much of the weekend, which means conditions will likely continue to worsen over the coming weeks.

Tropical storm Chris has been upgraded to a hurricane, becoming the first named hurricane of the Atlantic season, according to the National Hurricane Center.

The storm, which is located in the northern Atlantic, has strengthened during the last several hours. Hurricane Chris' maximum sustained winds are now 75 mph. Chris remains no threat to land as it moves northeast at 20 mph.

Hurricane Chris has been named nearly two months earlier than the average first date of a hurricane in the Atlantic which is August 14, according to Dennis Felton with the National Hurricane Center.

This is also only the third time since record keeping began back in the late 1800s that there have been three named storms so early in the season. Normally storms are not officially named until July 11, Felton said.

Tropical Storm Chris has formed in the Atlantic Ocean, though forecasters don't expect it to ever threaten land, according to the National Hurricane Center.

As of about 5 p.m. ET, the storm was located about 560 miles south of Cape Race, Newfoundland, with maximum sustained winds of 45 mph, according to the center.

The storm was moving to the east at 8 mph and was forecast to stay out over the open Atlantic and gradually weaken over the next couple of days as it encounters cooler water. 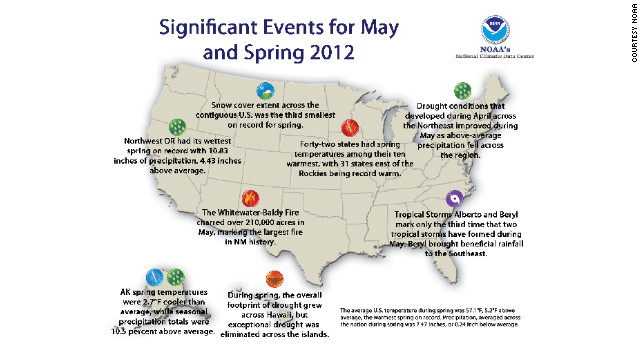 Geomagnetic and solar radiation storms hitting Earth after Tuesday's solar flares may not be as big as advertised, the National Oceanic and Atmospheric Administration said Thursday.

Together, such storms can affect GPS systems, other satellite systems and power grids, but none of these problems has been reported, even as the leading edge of the sun's coronal mass ejections from Tuesday hit Earth on Thursday morning, scientists said.

The geomagnetic storm has reached only G1 intensity on a scale from G1 (weak) to G5 (extreme), and the solar radiation storm is an S3 (strong) on a similar 1-to-5 scale, NOAA's Space Weather Prediction Center said. Earlier, NOAA had predicted a G3/S4 event.

Still, the solar radiation storm has prompted some airlines to divert planes from routes near the north pole, where radio communications may be affected and passengers at high altitudes may be at a higher than normal radiation risk.

U.S. politics had its "Super Tuesday" yesterday, and so did the sun, says Joseph Kunches from NOAA’s Space Weather Prediction Center in Boulder, Colorado.

That's because the sun had two solar flares associated with two coronal mass ejections. Coronal mass ejections involve massive amounts of energy and charged particles shooting out of the sun, and can cause problems if directed at Earth, as was the case over the last couple of days.

This event may stir up a geomagnetic storm, and lead to disruptions to high-frequency radio communications, global positioning systems and power grids, NASA's Goddard Space Flight Center said Wednesday. The peak of the storm is expected to hit Thursday morning; it may gradually diminish by Friday morning.

How to prepare for a hurricane

Tuesday's earthquake on the U.S. East Coast shows what can happen when a big event happens with no warning. The cell phone network was overwhelmed, people poured into the streets and social media exploded. I think an earthquake has to be the scariest natural disaster to encounter, because you don't know it is coming.

Hurricanes are a whole different story. With all the sophisticated satellite, radars and computers the world has at its disposal, we know days in advance that Hurricane Irene - churning near the Bahamas on Wednesday - is heading toward the Carolinas and will likely pound the Northeast over the weekend. While you can't stop a hurricane from damaging things, you can protect yourself and your family by preparing.
Some tips:

Have a portable disaster supply kit - It's important to gather some things before a storm, because supplies may be gone after the storm hits. This to-go bag should be portable, and it should contain:

END_OF_DOCUMENT_TOKEN_TO_BE_REPLACED 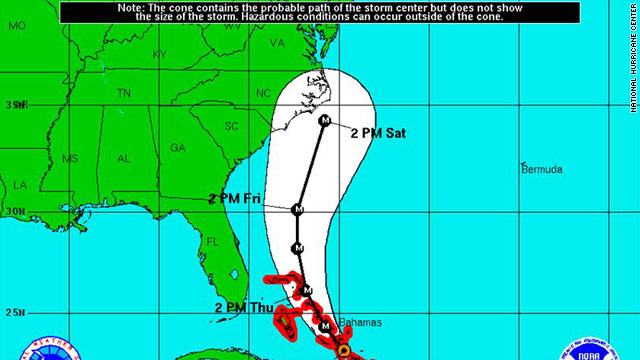 It sounds like something out of the Austin Power movies or Robert DeNiro’s “circle of trust” in the Focker movies, but in the world of hurricanes the “Cone of Uncertainty” is just that; as the forecast goes out in time, the exact location of the hurricane becomes less certain.  Therefore the official forecast from the National Hurricane Center paints an area around the expected track to reflect the average error of the forecast.

You'll see the cone in the image above. The image shows the National Hurricane Center's prediction, as of 5 p.m. Wednesday, of where the hurricane could go over the next three days. The "cone of uncertainty," representing a range where forecasters think the hurricane's center could go, is in white.

The hurricane center, located near Miami, is tasked by the National Weather Service and the National Oceanic and Atmospheric Administration to constantly watch the tropics and warn when tropical waves and disturbances grow into organized low-pressure areas known as tropical depressions. When tropical depressions develop, the hurricane center starts issuing advisories on the system.