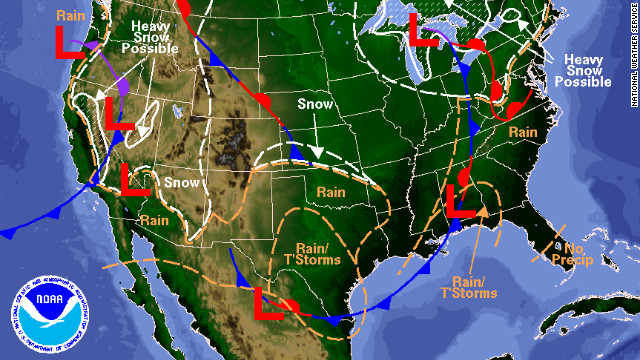 A storm system in the U.S. West is expected to pose a triple threat to the country over the next three days, eventually bringing snow to the Southwest, a blizzard to the Central Plains, and severe storms to Texas, Louisiana, and Arkansas, according to CNN's weather unit.

Portions of California, Nevada, Arizona, New Mexico and Colorado, especially those at higher elevations, face winter storm conditions over the next 24 hours.

Then, the National Weather Service says portions of Kansas and Nebraska could see more than a foot of snow by Thursday. Meanwhile, significant ice buildup could make travel treacherous in the southern Plains. The weather service advises postponing travel until after the storm passes if possible.

Later on in the week, the storm system could dump up to six inches of rain on areas from Mississippi to Georgia.

Hurricane Irene: What you can expect on Sunday, beyond

[Updated, 11:18 p.m. ET Saturday] Irene made landfall about 7:30 this morning on the Outer Banks as a Category 1 hurricane, with sustained 85 mph winds.

The center of Irene is moving north through the Pamlico Sound and will exit the North Carolina/Virginia coast near or over Virginia Beach back into the Atlantic Ocean late this afternoon.

The storm will then rake the Northeast from Virginia to Maine as it hugs the coastline.  Storm surge will be worst to the east of where the storm makes landfall.

Here's what to expect in selected cities:

- Norfolk, Virginia: City is in the worst weather now with winds diminishing after midnight.

- Boston: Tropical storm force winds should arrive around 2 p.m. The worst of the storm should be 5 p.m. to 9 p.m. with hurricane force winds possible.

- Canada: The center of the weather system should enter Canada by 8 a.m. Monday.