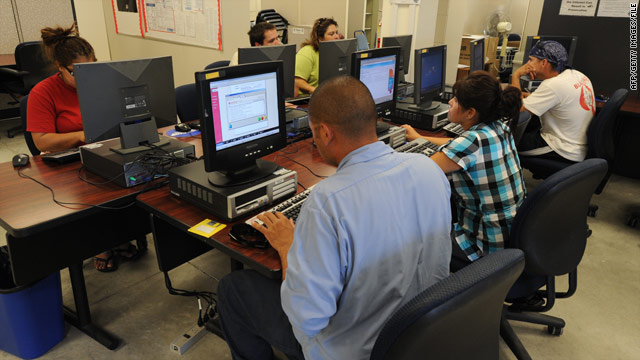 The number of Americans filing for their first week of unemployment benefits unexpectedly fell for a second straight week last week, according to a government report released Thursday.

The number of first-time filers for unemployment insurance fell more than expected last week, according to a weekly government report released Thursday.

There were 473,000 initial jobless claims filed in the week ended Aug. 21, down 31,000 from an upwardly revised 504,000 the previous week, according to the Labor Department's weekly report.

Economists surveyed by Briefing.com were expecting new claims to fall to 485,000.

Claims had been stuck in the mid- to upper-400,000 range for about nine months, but spiked above 500,000 for the first time since November in last week's report.

The number of Americans filing first-time claims for unemployment insurance rose last week, according to a government report released Thursday.

The number of claims was higher than expected. A consensus estimate of economists surveyed by Briefing.com expected 458,000 claims.

Washington Post co. announced Wednesday it is looking to sell Newsweek magazine, which has posted losses since 2007 and is expected to continue to see sales decline in 2010.

END_OF_DOCUMENT_TOKEN_TO_BE_REPLACED

After months of speculation, President Obama finally named names on Thursday, saying who he plans to nominate to the Federal Reserve's board of governors.

And the two vacancies on the seven-member board would be filled by Sarah Raskin, the Maryland Commissioner of Financial Regulation, and Peter Diamond, a professor at the Massachusetts Institute of Technology.

END_OF_DOCUMENT_TOKEN_TO_BE_REPLACED

United and Continental near merger deal

The commercial carriers' boards of directors are expected to discuss the negotiations through the weekend and announce the merger on Monday, said the Journal. The union would allow the company to overtake Delta Air Lines, which merged with Northwest Airlines in 2008, as the world's biggest airline.

The deal could still fall through, as it did when the two airlines discussed combining in 2008 and Houston-based Continental backed out. But despite an earlier dispute on pricing, the Journal said discussions are still on track.

33 states out of money to fund jobless benefits

With unemployment still at a severe high, a majority of states have drained their jobless benefit funds, forcing them to borrow billions from the federal government to help out-of-work Americans.

A total of 33 states and the Virgin Islands have depleted their funds and borrowed more than $38.7 billion to provide a safety net, according to a report released Thursday by the National Employment Law Project. Four others are at the brink of insolvency.

Federal Reserve policymakers are worried that the economic recovery may lose steam going forward, despite recent moderate improvements, according to minutes from their recent policy meeting released Tuesday.

Though the latest data suggest an uptick in economic activity, Fed members believe that some sectors of the economy could stifle overall growth, the minutes from the March 16 meeting said.

END_OF_DOCUMENT_TOKEN_TO_BE_REPLACED

6:00 am ET May 16, 2021 RETWEET
Tropical Cyclone Tauktae continues to strengthen as it moves parallel along the western coast of India. It will conâ€twitter.com/i/web/status/1â€¦49
CNNweather

5:34 am ET May 16, 2021 RETWEET
This weather reporter got caught in an on-air graphics error that "multiplied" her across the screenâ€twitter.com/i/web/status/1â€¦M4
cnni