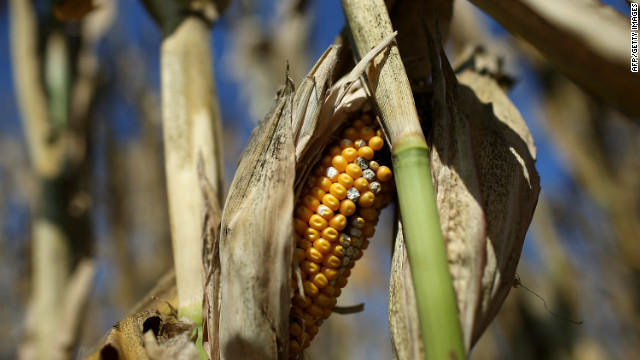 The drought that's drying up the Heartland isn't just an American problem. It's causing food prices to surge worldwide.

And it could get worse.

"This is not some gentle monthly wake-up call, it's the same global alarm that's been screaming at us since 2008," said Colin Roche of Oxfam, noting that the drought could lead to food shortages for millions of people worldwide.

Food is a major U.S. export, so the drought affects prices around the globe.

"World leaders must snap out of their lazy complacency and realize the time of cheap food has long gone," Roche said.

In July, food prices jumped 6%, after three months of declines, according to the United Nations' monthly Food Price Index released Thursday. The main drivers behind the increase? Grain prices. And more specifically, corn prices, which have hit record highs in recent weeks.

According to the U.N. report, global corn prices surged nearly 23% in July, exacerbated by "the severe deterioration of maize crop prospects in the United States, following drought conditions and excessive heat during critical stages of the crop development."

"It's going to have a big impact [on consumers]," said Sam Zippin, an analyst at financial information firm Sageworks. "Corn is in almost everything."

Food prices have been creeping up throughout the United States, as hot temperatures across the Midwestern and Western parts of the nation have dried out crops and driven up the price of corn and grain. 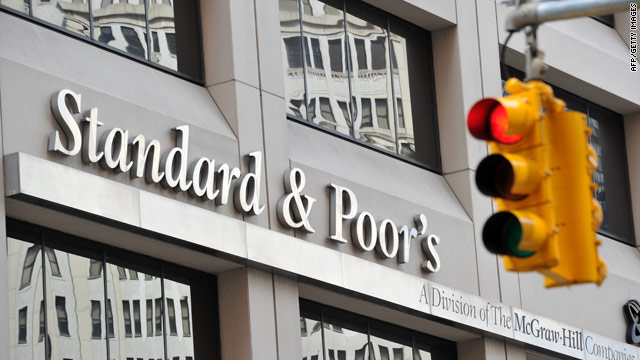 Credit rating agency Standard & Poor's is being investigated by the U.S. Justice Department for allegedly overrating mortgage-backed securities, whose meltdown led to the 2008 financial crisis, according to a report published Thursday.

In particular, The New York Times said the government was looking into whether analysts for S&P, a unit of McGraw Hill Co., wanted to give lower ratings to the mortgage securities, but were overruled by business managers. S&P, like other ratings agencies, collects fees from issuers for rating securities.

The Justice Department declined to comment to CNN regarding the reported investigation. S&P did not immediately return comment to CNNMoney.

The report also said the Securities and Exchange Commission is also investigating S&P, and might be looking into rating agencies Moody's Corp. and Fitch Ratings, concerning mortgage securities. SEC officials had no comment to CNNMoney.

Concerns that ratings agencies overrated mortgage securities have been voiced ever since the financial crisis. But the situation is complicated politically by the fact that the report comes nearly two weeks after S&P downgraded the credit rating of U.S. debt, stripping the world's largest economy of its prized AAA status. 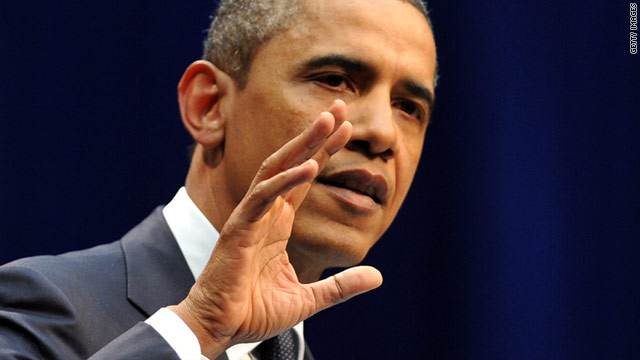 President Obama, in his latest effort to patch frayed relations with businesses, signed an executive order Tuesday intended to "strike the right balance" between health, safety and environmental regulations and economic growth.

The president, in an op-ed piece in the Wall Street Journal, wrote that his order will prompt "a government-wide review of the rules already on the books to remove outdated regulations that stifle job creation and make our economy less competitive."

"It's a review that will help bring order to regulations that have become a patchwork of overlapping rules, the result of tinkering by administrations and legislators of both parties and the influence of special interests in Washington over decades," Obama wrote.

The business world has locked horns with the Obama administration over such legislation as health care and financial reform that the president signed into law last year. In his annual State of American Business address on Jan. 11, U.S. Chamber of Commerce President Tom Donohue targeted the "web of red tape" in health care, financial reform and energy regulation as holding back economic recovery.

After his Democratic Party suffered a big defeat in the November midterm election, losing control of the House, the president promised to improve his ties with business. 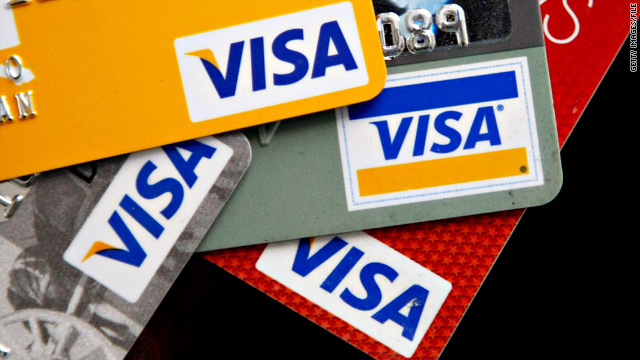 [Updated at 5:15 p.m.] ﻿The corporate websites of Visa and MasterCard
were inaccessible at times Wednesday due to an apparent cyberattack by purported Wikileaks backers.

Messages posted on Twitter indicated the attacks may be in response to recent moves by Visa and MasterCard against WikiLeaks, the website that recently released thousands of secret U.S. State Department documents.

"The issue appears to be the result of a concentrated effort to flood our corporate website with traffic and slow access," said MasterCard spokesman James Issokson, in a prepared statement. "We are working to restore normal service levels."

MasterCard and Visa Europe, a division of Visa, had said they were working to stop the acceptance of their cards on WikiLeaks.

GE said Thursday it will buy 25,000 electric vehicles for its fleet through 2015 in the largest-ever purchase of electric cars.

GE will begin with an initial purchase of 12,000 vehicles from General Motor Co., starting with Chevy Volt in 2011. The conglomerate said it "will add other vehicles as manufacturers expand their electric vehicle profiles."

The first Chevrolet Volt is expected to roll off production lines later this month.

GM confirmed the announcement with CNNMoney.com.

The deal has been approved by the board of directors of each airline, and is now contingent upon the approval of regulators and AirTran stockholders.

END_OF_DOCUMENT_TOKEN_TO_BE_REPLACED

UAL Corp.'s United Airlines announced on Monday it will merge with Continental Airlines in a deal worth $3.2 billion, creating the world's largest airline.

END_OF_DOCUMENT_TOKEN_TO_BE_REPLACED

The SEC and the U.S. Attorney's office in New Jersey on Wednesday charged a Miami Beach-based businessman with allegedly running a Ponzi scheme that sucked in close to $1 billion.

END_OF_DOCUMENT_TOKEN_TO_BE_REPLACED

The next Greek tragedy: default or bail-out?

Greece is in danger of defaulting on its national debt as its bond market comes under increasing pressure, unless its European neighbors intervene.

Analysts believe that the shape of Greece's fiscal future – default or bail-out – could be decided in the coming days.

END_OF_DOCUMENT_TOKEN_TO_BE_REPLACED

A federal appeals court in Washington ruled on Tuesday that the FCC does not have the authority to stop Internet service provider Comcast from interfering with its customers' file sharing.

Tuesday's court decision is the latest volley in a legal fight dating back to 2007, when Comcast subscribers realized that the company was hindering their ability to use peer-to-peer applications like BitTorrent to swap files that consume large amounts of bandwidth.

END_OF_DOCUMENT_TOKEN_TO_BE_REPLACED

A new study gives high marks to more than two dozen vehicle brands for improving their quality in 2010 - including troubled Toyota - but said that many of these names suffer from lousy consumer perceptions.