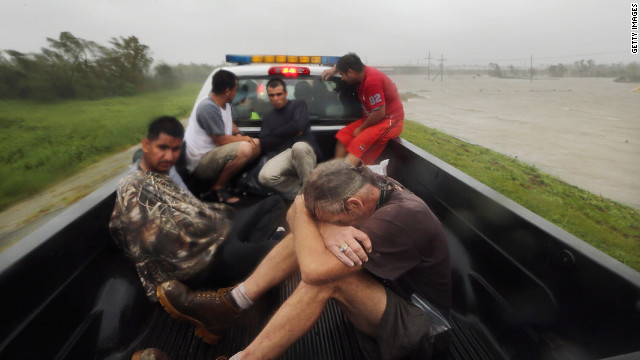 Refresh this page for the latest updates or read the full CNN story here.

[Updated 10:20 p.m. ET] Water that overtopped levees was trapped in Plaquemines Parish with nowhere to drain. Officials were considering intentionally breaching a levee downstream to allow some of the floodwater to flow back out of the inundated area, Gov. Bobby Jindal said.

Parish President Billy Nungesser said parish officials will go out at low tide to check the back levee - a second line of defense - at the town of Braithwaite and determine where to punch holes in it. It will be Saturday, at the earliest, before crews can cut the levee open, letting water flow out into the marsh.

[Updated 9:52 a.m. ET]¬Ý New Orleans officials said there had been 12 incidents of looting. Police said arrests were made in each case, but didn't specify how many people were involved.

[Updated 9:48 p.m. ET] Lake Pontchartrain's water levels are "beginning to stabilize," St. Tammany Parish officials said, according to the New Orleans Times-Picayune. Water had spilled out from the lake and flooded low-lying areas of the parish.

Rescues continue in areas around the vast Louisiana lake, including Lewisburg, Guste Island, Lacombe and Slidell, the newspaper's website reported.

[Updated 9:29 p.m. ET] Joey Amann gathered family and friends into his home in Hancock County, Mississippi, to ride out the storm, he told CNN affiliate WALA.

"It was scary. I mean, I've never seen the water raise this fast on this road and I've been here all my life. It just came out of nowhere."

The group ended up being rescued by emergency personnel in boats.

Amann told the station he lost his home to Hurricane Katrina in 2005.

"Thirty-six years I've lived here, and it's just devastating," he said. "Seven years ago, we were going through the same thing. No one thought it would be this bad, but it's worse than we anticipated."