A water tanker packed with explosives drove into a military checkpoint in northwest Pakistan on Sunday, killing at least 17 troops in the ensuing explosion, authorities said. 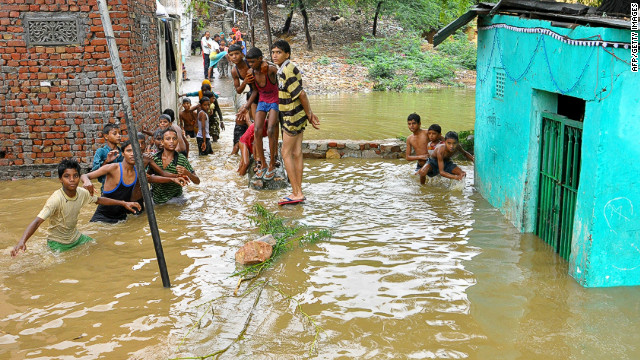 Hundreds of homes have been damaged in the flooding, which has hit parts of Punjab, Khyber Pakhtunkhwa, the Federally Administered Tribal Areas, and Pakistani-controlled Kashmir, he said.

Rescue workers are seeking to deal with a major landslide in the Kashmiri city of Muzaffarabad, according to the disaster agency.

Roads are blocked, some 390 houses have been damaged and an unknown number of people are dead and injured, the agency said. Some families trapped by the landslide have been given emergency food and water supplies.

Elsewhere in Pakistani-controlled Kashmir, seven people were killed in Bagh by a flash flood and a landslide, while more than 100 houses were damaged in Koti, the disaster agency said.

More rainfall is on the way in Pakistani-controlled Kashmir, Punjab, Khyber Pakhtunkhwa, some isolated places in northeast Balochistan, and the country's capital, Islamabad, according to the agency.

Clean-up also was under way Thursday in neighboring India, where heavy rain in Rajasthan left 20 dead, the Rajasthan state department told CNN. Ten died in the capital, Jaipur, it said.

At least two people are dead and as many as 170 missing after a wooden boat carrying migrants to the Australian territory of Christmas Island sunk off the coast of Indonesia, a rescue official said early Sunday.

The boat was carrying more than 200 people when it left Indonesia's East Java province, according to Angipp Satoto of the Indonesian search-and-rescue team. Nearly 90 people were rescued from the water, he said.

Indonesian authorities are working with the Australian Maritime Safety Authority in the rescue efforts, Satoto said.

Most of those aboard the ship were Indonesians. Others aboard were of Afghan, Iranian, Turkish, French and Saudi Arabian origin, Satoto said.

The risk of dying from Covid-19 is 40 times the risk of developing a rare blood clotting condition after getting thâ€twitter.com/i/web/status/1â€¦o9
cnni

10:06 pm ET May 12, 2021 RETWEET
People who received different Covid vaccine types in each dose appear to be more likely to experience mild side effâ€twitter.com/i/web/status/1â€¦JQ
cnni

9:50 pm ET May 12, 2021 RETWEET
Local officials in Texas unanimously passed a resolution on Tuesday calling for a posthumous pardon for George Floyâ€twitter.com/i/web/status/1â€¦QK
cnni