Los Angeles police declare an unlawful assembly in the downtown area, saying protesters will be arrested if they di‚Ätwitter.com/i/web/status/1‚Ä¶4q

The Minneapolis Department of Public Safety says that 350 troopers are near the city's 5th precinct to clear the ar‚Ätwitter.com/i/web/status/1‚Ä¶sk

RT @CNN: An attorney for Kellie Chauvin, the wife of ex-Minneapolis police officer Derek Chauvin, has filed for a dissolution of marriage,‚Ä¶

A person who partied in the Lake of the Ozarks, Missouri, area on Memorial Day weekend has tested positive for coro‚Ätwitter.com/i/web/status/1‚Ä¶kZ

RT @CNN: .@CNNValencia and crew take cover after an explosion takes place in the space between protesters and police at the CNN Center in A‚Ä¶

Protesters in Washington breached the complex of the Treasury Department and spray painted the area, a law enforcem‚Ätwitter.com/i/web/status/1‚Ä¶MH 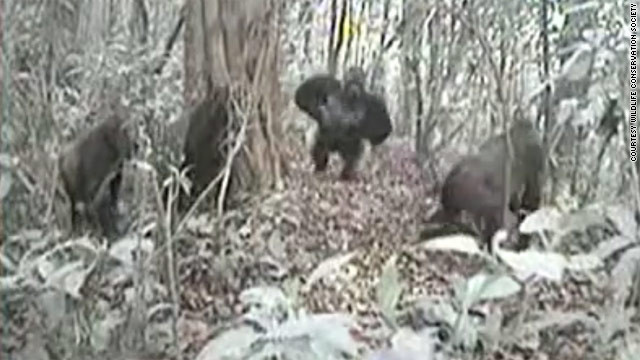 A rare species of gorillas was captured on one of four video cameras set up in Cameroon‚Äôs Kagwene Gorilla Sanctuary, according to the Wildlife Conservation Society.

Cross River gorillas are said to be the world‚Äôs rarest gorillas, with only about 250 still alive.

‚ÄúThis video gives us all a spectacular view into the hidden world of one of our closest relatives, which is in dire need of our help to survive,‚Äù Steve Sanderson, president of the Wildlife Conservation Society, ¬Ýsaid in an online statement.

Cross River gorillas¬Ýare also the world‚Äôs most shy gorillas, at least around researchers. They don‚Äôt seem bothered by cameras though.

‚ÄúCross River gorillas occur in very low densities across their entire range, so the appearance of a possible snare injury is a reminder that continued law enforcement efforts are needed to prevent further injuries to gorillas in the sanctuary,‚Äù said Dr. Liz Macfie, gorilla coordinator for WCS‚Äôs Species Program.

The Kagwene Gorilla Sanctuary was established by the government of Cameroon in 2008 to protect the endangered gorillas. It evolved out of the ‚ÄúGorilla Guardian‚Äù community network, created by the WCS to give gorillas a better chance to survive in unprotected forest sites in Cameroon.

A person who partied in the Lake of the Ozarks, Missouri, area on Memorial Day weekend has tested positive for coro‚Ätwitter.com/i/web/status/1‚Ä¶Xf
cnni

2:01 am ET May 30, 2020 RETWEET
"This is not a protest. ... This is chaos." Atlanta Mayor Keisha Lance Bottoms denounced vandalism in her city afte‚Ätwitter.com/i/web/status/1‚Ä¶dA
cnni

1:31 am ET May 30, 2020 RETWEET
Hundreds of police advancing toward us on W 31st in Minneapolis #GeorgeFloyd https://t.co/j9og1TGEUt
sarasidnerCNN