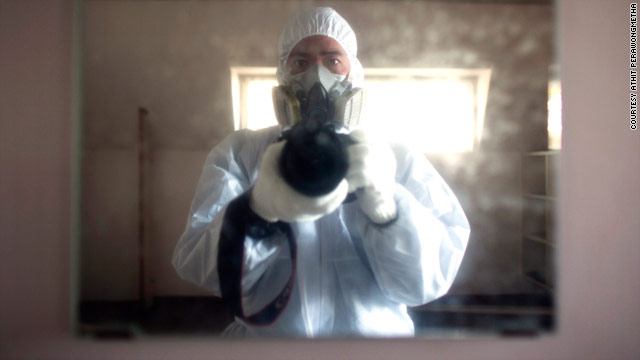 A ŌĆ£time stop.ŌĆØ ThatŌĆÖs what photographer Athit Perawongmetha found when he entered the Fukushima evacuation zone to document the ghost town left behind in the wake of the nuclear crisis in Japan. The traffic lights were still on and air conditioners were running, but there were no people. ŌĆ£The city is untouchable. Everything I see is like a dream,ŌĆØ he said.

Perawongmetha documented the scene with his camera, taking photos of the destruction from the March 11 earthquake and tsunami, which knocked out the Fukushima Daiichi nuclear power plant's cooling systems, leaving operators with no way to keep the three operational reactors from overheating after they shut down.

He came back with photos of empty streets, abandoned houses left open, cats and dogs forsaken by their owners, and shoes left in a doorway, waiting for their ownersŌĆÖ return┬Ā- but no people.

On April 6, the first day of his journey into Fukushima,┬ĀPerawongmetha did not see a single person.

Using only a mask as protection from the radiation, he and his travel companions used GPS to explore the area within the 30-kilometer (18.6-mile) evacuation zone. On the second day inside the zone, April 7, they did not realize how close they were to the plant. When they looked at a map later that night, they realized they were┬Āfive kilometers (three miles) from the nuclear plant.

The next day, Perawongmetha went with his friends to a radiation screening center to be tested. Their levels were within the acceptable range despite how close they came to the plant. After learning that his radiation levels were OK, Perawongmetha said he wanted to return.

On Monday, Perawongmetha went inside the evacuation zone for the third time. This time he was not taking any chances; he wore a full protective suit and mask.┬Ā He went within 1.5 kilometers (one mile) of the plant, closer than he had ever been.

Perawongmetha said he decided to go ŌĆ£to see something inside because all the press didnŌĆÖt go inside before.ŌĆØ

He said the crisis has given him a┬Āgreat respect for the Japanese.

ŌĆ£I thought that the Japanese people kept very calm ... and┬Ā(didn't) panic with the thing that happened,ŌĆØ he said. ŌĆ£They keep their feelings inside; they try to stay very quiet and wait for some help.ŌĆØ

Perawongmetha is from Bangkok, Thailand. He arrived in Japan on March 21.┬ĀIt was his first time in Japan and his first assignment covering an earthquake or tsunami.

ŌĆ£It is quite sad about these things happening in Japan,ŌĆØ Perawongmetha said. ŌĆ£This is a real big crisis for Japan. I hope that Japan will come back soon, like they came back after World War II."

A huge Asian water monitor lizard went into a 7-Eleven in Thailand and climbed a shelf, surprising shoppersŌĆtwitter.com/i/web/status/1ŌĆ”lZ
cnni

2:31 am ET April 11, 2021 RETWEET
In a forecasting study, scientists found that 34% of the area of all Antarctic ice shelves, measuring some half a mŌĆtwitter.com/i/web/status/1ŌĆ”XC
cnni

2:00 am ET April 11, 2021 RETWEET
A growing number of women are entering the world of trucking when demand for drivers is at a critical high. Many ofŌĆtwitter.com/i/web/status/1ŌĆ”4S
cnni

1:30 am ET April 11, 2021 RETWEET
China has ordered Alibaba to pay a record fine of 18.2 billion yuan after antitrust regulators concluded that the cŌĆtwitter.com/i/web/status/1ŌĆ”3k
cnni