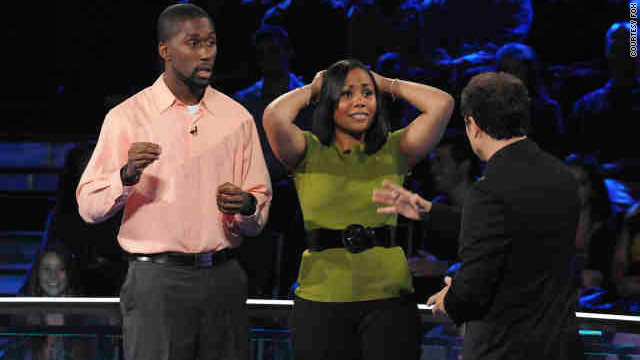 The recently engaged couple lost $800,000 in winnings on the game show "Million Dollar Money Drop" this week when they gave what they were told was a wrong answer to a question. Turns out they might have been correct after all.

Host Kevin Pollak asked, "Which of these was sold in stores first:" the Macintosh computer, the Sony Walkman or Post-it Notes? Okoye and Mayi answered Post-it Notes, and the host told them that they were wrong. After the episode, debate raged on the Web about whether the couple were actually right.

On Gawker.com, blogger Richard Lawson wrote that apparently, Post-it Notes "didn't go on sale nationally until 1980, but were market tested in four cities starting in 1977." The Walkman debuted in 1979.

Ah, the eternal question could plague the couple forever: Which came first, the Post-it Note or the Walkman?

END_OF_DOCUMENT_TOKEN_TO_BE_REPLACED

The extra protection double-masking provides isn't so much about adding layers of cloth, but eliminating any gaps oâ€twitter.com/i/web/status/1â€¦39
cnni

5:59 pm ET April 16, 2021 RETWEET
The White House is backtracking on its decision not to raise the US refugee cap after criticism and says Biden willâ€twitter.com/i/web/status/1â€¦ly
cnni

5:26 pm ET April 16, 2021 RETWEET
The 19-year-old suspect in the Indianapolis mass shooting at a FedEx Ground facility was a former employee there anâ€twitter.com/i/web/status/1â€¦B4
cnni