The US Treasury Department has announced sanctions on a Russian government research institution linked to a malware‚Ätwitter.com/i/web/status/1‚Ä¶Mv

Drugmaker AstraZeneca will resume its experimental Covid-19 vaccine trial in the United States, which has been on h‚Ätwitter.com/i/web/status/1‚Ä¶aq

More than 50 million Americans have already cast their general election ballots with a week and a half until Nov. 3‚Ätwitter.com/i/web/status/1‚Ä¶rT

The US Mission in Turkey urged US citizens "to exercise heightened caution" after receiving reports of a potential‚Ätwitter.com/i/web/status/1‚Ä¶kh

RT @CNNPolitics: Pres. Trump and Joe Biden clashed over how more than 500 children should be reunited with their parents after they were se‚Ä¶ 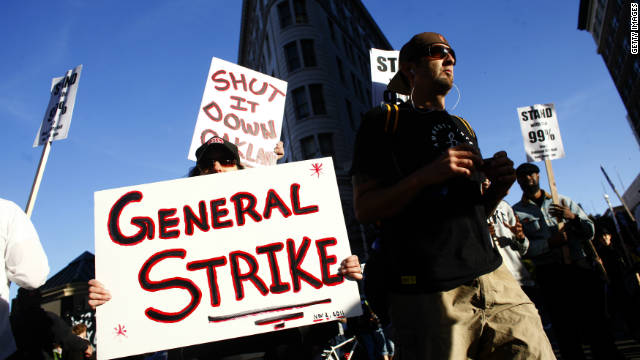 Demonstrators in Oakland, California, appeared to carry out a successful strike of downtown businesses Wednesday, as most merchants and retailers shuttered their doors during a largely peaceful protest.

Unlike prior Occupy Wall Street-style protests in downtown Oakland, no uniformed police officers were visible during the demonstrations as of Wednesday afternoon. Oakland gained national attention during a recent clash between protesters and police, who fired tear gas upon the demonstrators after they allegedly threw objects at officers, police said.

About the only businesses active in downtown Oakland Wednesday were street vendors selling food.

The General Assembly of Occupy Oakland, a loosely defined governing body of the protesters - voted 1,484 to 46 last week to call the general strike, though it is unclear what the group's demands are.

"(W)e invite all students to walk out of school. Instead of workers going to work and students going to school, the people will converge on downtown Oakland to shut down the city," the group's manifesto read. "We liberate Oakland and shut down the 1%."

Protesters at Occupy demonstrations nationwide generally have rallied against what they describe as corporate greed while asserting that the nation's wealthiest 1% hold inordinate sway over the remaining 99% of the population.

Occupy Oakland's call to strike follows a crackdown on protesters October 25. Police unleashed tear gas, and Iraq war veteran Scott Olsen suffered a fractured skull after being struck in the head by what protesters say was a tear gas canister.

The US Treasury Department has announced sanctions on a Russian government research institution linked to a malware‚Ätwitter.com/i/web/status/1‚Ä¶ZS
cnni

5:32 pm ET October 23, 2020 RETWEET
The family of a University of Washington professor who recently went missing during a hiking trip is pleading that‚Ätwitter.com/i/web/status/1‚Ä¶gb
cnni

5:12 pm ET October 23, 2020 RETWEET
Drugmaker AstraZeneca will resume the trial of its experimental coronavirus vaccine in the United States, which has‚Ätwitter.com/i/web/status/1‚Ä¶SN
cnni

4:08 pm ET October 23, 2020 RETWEET
If you thought giant "murder hornets" had disappeared because they dropped from the headlines, you are mistaken. E‚Ätwitter.com/i/web/status/1‚Ä¶un
cnni