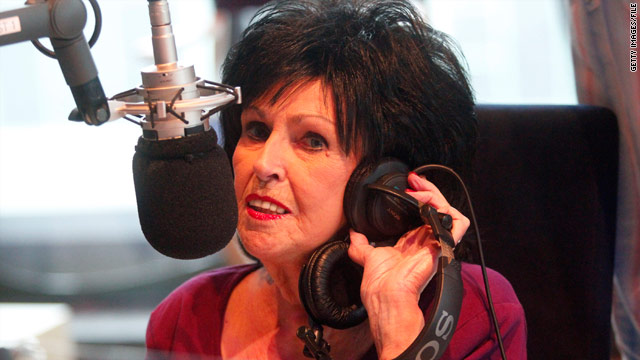 She‚Äôs called the queen of rockabilly, has secured a place in the Rock and Roll Hall of Fame, and at age 73 she‚Äôs teamed up with rocker Jack White to release a new album.

‚ÄúI was scared at first because I didn‚Äôt know what this young rock star was going to expect of me or ask me to do,‚Äù Jackson says on her website of her collaboration with White.

But she says White‚Äôs work quickly won her over.

‚ÄúI realized he wasn‚Äôt wanting to change my style of singing at all. He just wanted me to have new, fresher material. ‚Ä¶ He just wanted more of Wanda than I was used to putting out,‚Äù she says.

‚ÄúHe pulled out the 18-year-old young, feisty girl that was down in there buried,‚Äù Jackson said of White during an appearance on Conan O‚ÄôBrien on TBS Tuesday night.

Jackson belted out ‚ÄúFunnel of Love,‚Äù with White on guitar, and then Conan asked Jackson about what it was like to tour with the king of rock 'n' roll, Elvis Presley, 50 years ago.

END_OF_DOCUMENT_TOKEN_TO_BE_REPLACED

A huge statue of Jesus Christ is under construction in southern Brazil, and it will be even taller than its famous‚Ätwitter.com/i/web/status/1‚Ä¶QC
cnni

1:00 pm ET April 13, 2021 RETWEET
Our solar system boasts a diverse range of planets, but some of them may share a common phenomenon with Earth: rain‚Ätwitter.com/i/web/status/1‚Ä¶QG
cnni

12:44 pm ET April 13, 2021 RETWEET
@donie Lol. We also see too much. Work way too much. And are under too much pressure. But it‚Äôs the work I chose ovetwitter.com/i/web/status/1‚Ä¶jOxb
sarasidnerCNN

12:33 pm ET April 13, 2021 RETWEET
Despite a tumultuous period on and off the pitch, Barcelona is now the most valuable soccer club in the world, acco‚Ätwitter.com/i/web/status/1‚Ä¶w7
cnni