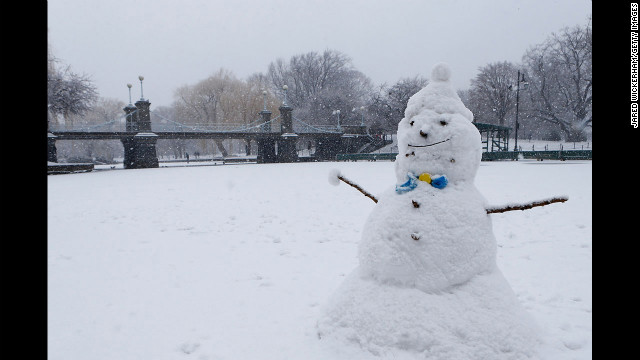 [Updated at 6:17 p.m.]¬† The storm has taken a toll on flights to and from the Northeast.

END_OF_DOCUMENT_TOKEN_TO_BE_REPLACED 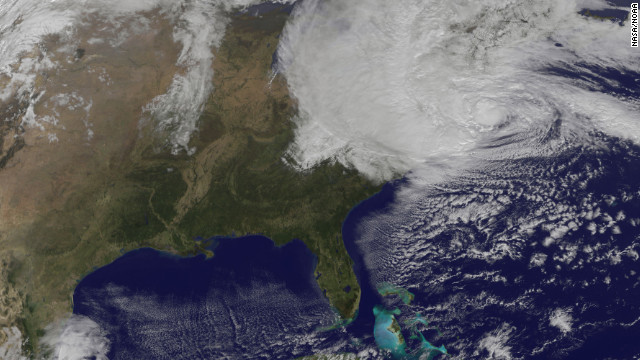 - Strongest ever: Based on pressure, Sandy is likely to be the strongest storm ever to make landfall north of Cape Hatteras, North Carolina, for as long as records have been kept. The benchmark storm, the 1938 Long Island Express Hurricane, contained a low pressure reading of 946 millibars. Sandy currently has a minimum pressure of 943 millibars. Generally speaking, the lower the pressure, the stronger the storm.¬† Stormsurf.com explains.

END_OF_DOCUMENT_TOKEN_TO_BE_REPLACED

Tent camps dot the streets in¬†Port-au-Prince, Haiti. The shelters, sometimes just draped tarps, are all that stand between residents and Mother Nature.

The country is still trying to battle back from a deadly cholera outbreak after the 2010 earthquake. So as the¬†storm threatens¬†to bring winds of about 74 mph and 12 inches of rain,¬†the challenges are mounting. The U.S. National Hurricane Center warned that the rain could cause life-threatening flash floods and mudslides.

END_OF_DOCUMENT_TOKEN_TO_BE_REPLACED

Monsoonal rainfall and a tropical storm cause major flooding in the Philippines. A third typhoon in five days hits China. Weeks of rains and floods have wreaked havoc on parts of Korea.

The recent uptick in tropical activity brings the Western Pacific tropical cyclone season back up to average after a slow start. But several recent flash-flooding events from higher-than-normal seasonal rainfall in southern Japan, as well as North Korea, have left soils full of moisture and vulnerable to additional flooding if typhoons and tropical storms track their way.

This is a very real threat as the Western Pacific tropical season runs year-round, but has a seasonal peak around September, mirroring the tropical Atlantic. We will likely see more flooding disasters around East Asia over the next couple of months as the tropics heat up and cyclones traverse these hard-hit areas from the Philippines all the way to North Korea.

The increased activity always has people wondering: Is this all a coincidence or is something else going on here?

We always say that global warming or climate change does not explain, or cause, specific weather events or disasters. But one of the consequences of climate change, according to climate scientists, is a higher frequency of extreme rainfall events. A warmer climate results in more moisture in the atmosphere from evaporation, and thus, higher rainfall amounts are possible in storms.

Could this be what we are seeing? Perhaps, especially considering we have not seen an increase in the number of tropical storms or typhoons over the past several years, but the number of intense flooding scenarios seem to be in the rise.

Typhoon Haikui slammed into the east coast of China on Wednesday morning, pummeling the area around the business metropolis of Shanghai with heavy wind and rain.

The storm's winds were at "severe typhoon" strength when it made landfall in the province of Zhejiang, about 225 kilometers (140 miles) south of Shanghai, the¬†China Meteorological Administration¬†said. The winds diminished to typhoon strength as Haikui moved inland.

The storm is the third tropical cyclone to make landfall on China's east coast in the past five days, with Typhoon Damrey and Tropical Storm Saola hitting last Friday. The storm threatens to dump heavy rainfall in excess of 150 milimeters (6 inches) on Shanghai, China's most populated city.

Although the storm's winds are expected to weaken as it moves overland, it will continue to dump large amounts of rain on the surrounding area, raising the risk of landslides and flooding.

"The rain is the bigger impact going forward," said CNNI meteorologist Taylor Ward. "We have already had up to 8 inches in some locations."

Ward said another 6 to 10 inches of rain were expected to fall, with "maybe isolated amounts greater."

Fueled by the seasonal monsoon rains and that nearby typhoon, widespread flooding in the Philippines worsened Tuesday, killing at least 11 people, the national disaster agency reported.

A landslide in the Manila suburb of Quezon City buried two houses, leaving nine people dead and four others injured, according to the National Disaster Risk Reduction and Management Center.Three of the dead were children, the state-run Philippines News Agency reported.

END_OF_DOCUMENT_TOKEN_TO_BE_REPLACED 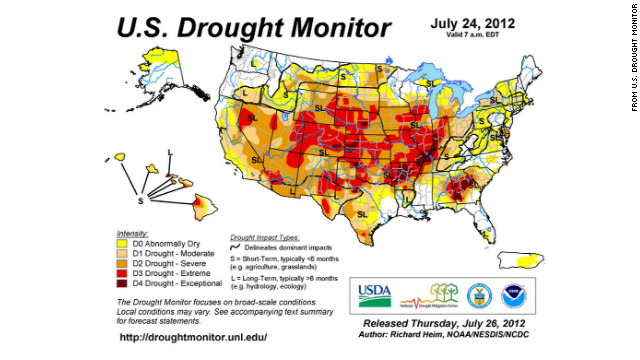 The portion of the country with some level of drought increased only slightly in the last week, but areas at risk for major crop losses and widespread water shortages jumped significantly,¬†according to a report from the National Drought Mitigation Center.

Areas of the contiguous United States under extreme or exceptional drought conditions increased by an area roughly the size of Texas - from 13.5% of the land to 20.5% - in the past seven days, according to the¬†Drought Monitor report¬†released Thursday.

"It's getting to the point where some of the (agricultural) damage is not reversible" in the extreme-drought areas, said¬†Brian Fuchs, a climatologist at the center. "The damage is done, and even with rain, you're not going to reverse some of these problems, at least not this growing season."

Meanwhile, the portion of the Lower 48 states under moderate or worse drought conditions rose slightly in the last week¬†- from 63.54% to 63.86% - putting the contiguous United States in the largest drought by area in the report's 12-year history. This is the fourth consecutive week the Lower 48 set a Drought Monitor record in this category.

Areas in the¬†"extreme" drought category - the third most severe of four classifications - could see¬†major crop and pasture losses with widespread water shortages, according to the center.

END_OF_DOCUMENT_TOKEN_TO_BE_REPLACED

Shrinking polar ice caps may be to blame for frigid Europe

Europe's deadly cold snap may have a lot to do with shrinking amounts of ice in the Arctic, a recent study suggests.

Nearly 300 deaths have been reported across the continent, with snow accumulations not seen in five decades reported in some places. Warsaw, Poland, has seen 11 days of temperatures well below average, with a coldest reading of 35 below zero Fahrenheit. 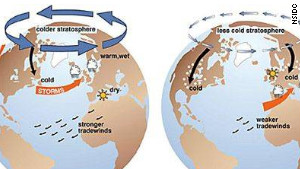 As warmer air rises into the stratosphere over the Arctic, colder surface air moves south bringing storms to Europe.

Scientists at the Alfred Wegener Institute for Polar and Marine Research in Potsdam, Germany, say the frigid, snowy European winter has its origins in a warm Arctic summer.

The U.S. National Oceanic and Atmospheric Administration reported that July 2011 was the fourth-warmest July on record. A warm summer in the Arctic cuts the amount of sea ice. NOAA reports that sea-ice levels last July were the lowest in three decades.

The effect is twofold, the Wegener scientists report.

First, less ice means less solar heat is reflected back into the atmosphere. Rather, it is absorbed into the darker ocean waters. Second, once that heat is in the ocean, the reduced ice cap allows the heat to more easily escape into the air just above the ocean's surface.

Because warmer air tends to rise, the moisture-laden air near the ocean's surface rises, creating instability in the atmosphere and changing air-pressure patterns, the scientists say.

One pattern, called the Arctic Oscillation, normally pushes warm Atlantic air over Europe and keeps Arctic air over the poles.

But in mid-January this year, the Arctic Oscillation abruptly changed, allowing the jet stream to plunge into Siberia and push cold and snowy weather over much of Europe.

Similar situations have emerged the past two years.

Check out some more reports on what this winter's been like, both in the U.S. and around the world:

Beijing has set up more than 100 so-called overseas police stations across the globe to monitor, harass and in some‚Ätwitter.com/i/web/status/1‚Ä¶yh
cnni

5:45 am ET December 4, 2022 RETWEET
The mural, which shows a woman wearing a gas mask and carrying a fire extinguisher, was "ruthlessly cut off by atta‚Ätwitter.com/i/web/status/1‚Ä¶mm
cnni

5:00 am ET December 4, 2022 RETWEET
From early on in this World Cup, the traditional heavyweights of the game have been up against it. cnn.it/3P0xyfB
cnni

4:45 am ET December 4, 2022 RETWEET
Jonathan, the Seychelles giant tortoise, is thought to have been born around 1832. cnn.it/3uGfQEZ
cnni

4:00 am ET December 4, 2022 RETWEET
The family home of Iranian rock climber Elnaz Rekabi has been demolished, according IranWire, after she rose to int‚Ätwitter.com/i/web/status/1‚Ä¶dz
cnni

Beijing has set up more than 100 so-called overseas police stations across the globe to monitor, harass and in some‚Ätwitter.com/i/web/status/1‚Ä¶yh
cnni

5:45 am ET December 4, 2022 RETWEET
The mural, which shows a woman wearing a gas mask and carrying a fire extinguisher, was "ruthlessly cut off by atta‚Ätwitter.com/i/web/status/1‚Ä¶mm
cnni

5:00 am ET December 4, 2022 RETWEET
From early on in this World Cup, the traditional heavyweights of the game have been up against it. cnn.it/3P0xyfB
cnni

4:45 am ET December 4, 2022 RETWEET
Jonathan, the Seychelles giant tortoise, is thought to have been born around 1832. cnn.it/3uGfQEZ
cnni

4:00 am ET December 4, 2022 RETWEET
The family home of Iranian rock climber Elnaz Rekabi has been demolished, according IranWire, after she rose to int‚Ätwitter.com/i/web/status/1‚Ä¶dz
cnni