A man who was shot during protests last year in Kenosha, Wisconsin, is suing the city, the county and many of its o‚Ätwitter.com/i/web/status/1‚Ä¶uN

Alex Murdaugh waived an extradition hearing in Florida and is expected to return to South Carolina to face charges‚Ätwitter.com/i/web/status/1‚Ä¶C5

Counterterrorism officers will lead the investigation into the stabbing death of British Member of Parliament David‚Ätwitter.com/i/web/status/1‚Ä¶8u

China successfully launches a three-person crew for a 6-month mission at its new space station, a major milestone f‚Ätwitter.com/i/web/status/1‚Ä¶ft

The Justice Department says it will ask the Supreme Court to block Texas' 6-week abortion ban while legal challenge‚Ätwitter.com/i/web/status/1‚Ä¶76

The cylinders, each 16 feet tall and weighing 115 tons, were not damaged, and no radiation was released, said Rich Zuercher, spokesman for Dominion Virginia Power, which owns the North Anna Power Station. 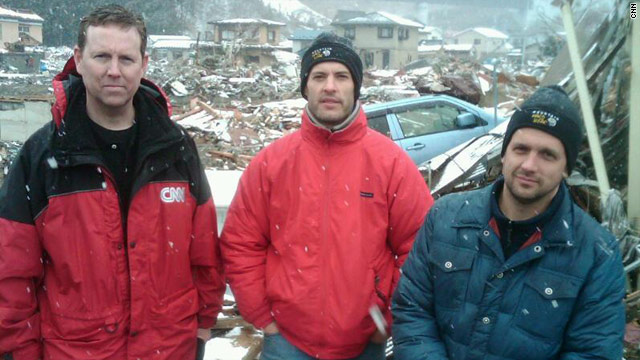 CNN Situation Room correspondent Brian Todd, producer Dugald McConnell and photojournalist Doug Schantz spent a week embedded with a USAID search-and-rescue team from Fairfax County, Virginia. The team traveled in some of the most devastated areas in Japan searching for bodies and survivors. Unfortunately, the team found no survivors in the rubble. Here's Brian's reporter's notebook. (The Situation Room with Wolf Blitzer airs weekdays 5-7 p.m. ET and Saturday 6 p.m. ET):

I think what stands out most in my memory is the images of standing in the middle of the rubble. The pictures we saw were amazing. To stand in the middle of it and look around at the complete devastation and realize the force of the water, and what it must have been like to stand there and watch everything just get swept away, that was just an amazing sensation.

It was also amazing to look at the people coming back and picking through their houses, that just weren't even there anymore, looking for remnants of their lives. One of the rescuers told me that can be a way of preventing themselves from falling into depression: to find a remnant of their past lives in order to start anew.

The biggest challenges were sometimes just walking 10 or 15 feet over the rubble. I'm following one of the rescuers, to try to bring that home to viewers. It can be tricky going sometimes - stepping over something, squeezing through openings or crossing a pile of rubble.

Another challenge was transmitting our material, where there is no power or internet or cell service. We used batteries and generators and a machine called a b-gan, which let us transmit by connecting our laptop to the internet using a small satellite antenna. It has to be outside and costs about $16 a minute. The other challenge was consuming the MREs, meals ready to eat, in plastic pouches. You're eating what the soldiers eat in wartime. We were eating this every day for about eight days.

But those challenges were nothing compared to the difficulties the people we saw faced in the disaster and will face in rebuilding.

We were given a very rare, inside look at BP's crisis command center in Katy, Texas, just west of Houston.

We got only 30 minutes to sweep through, but saw some high-tech wizardry at work as BP tries to contain this spill.

END_OF_DOCUMENT_TOKEN_TO_BE_REPLACED

Though summer rainfall brought some relief to the Southwest, the unrelenting drought there is about to get worse wi‚Ätwitter.com/i/web/status/1‚Ä¶Np
CNNweather

2:46 pm ET October 15, 2021 RETWEET
Vaccine advisers to the US Food and Drug Administration have voted unanimously to recommend a booster dose of Johns‚Ätwitter.com/i/web/status/1‚Ä¶dV
cnni

2:30 pm ET October 15, 2021 RETWEET
Throughout August, the risk of dying from Covid-19 was 11 times higher for unvaccinated adults than for fully vacci‚Ätwitter.com/i/web/status/1‚Ä¶1s
cnni

2:16 pm ET October 15, 2021 RETWEET
It‚Äôs happening. Hope you‚Äôll give it a chan@CNNplusplus is launching in 2022. I know in the twitter-verse that‚Äôstwitter.com/i/web/status/1‚Ä¶BJWvZmwX
sarasidnerCNN