Democrats plan to tie a suspension of the debt limit to a spending bill to keep the government funded, setting up aā€twitter.com/i/web/status/1ā€¦w3

The Supreme Court will consider a Mississippi abortion law on December 1. It's one of the most substantial cases toā€twitter.com/i/web/status/1ā€¦EU

The US plans to ease travel restrictions on visitors from the EU and the UK in November, a person familiar with theā€twitter.com/i/web/status/1ā€¦sy

BREAKING: A shooting has been reported at a university in Perm, Russia, with students and teachers locking themselvā€twitter.com/i/web/status/1ā€¦qK 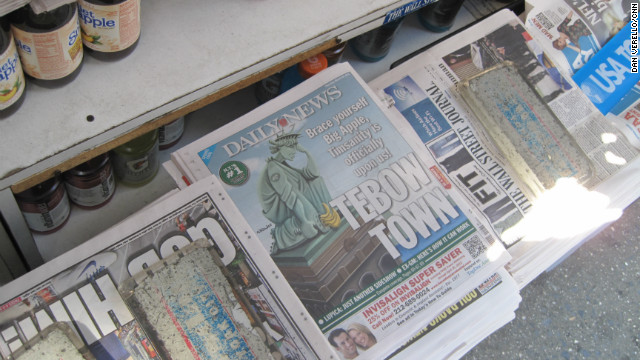 Editors of New York's tabloids had fun with the trade of quarterback Tim Tebow to the New York Jets.
March 22nd, 2012
07:51 PM ET

Big reaction to Tebow trade in the Big Apple

First, New York had Linsanity. Now it's Tebow Time. Fans in New York are fickle after all.

After a few hours of on again, off again wrangling, Tim Tebow inked a deal with the "city that never sleeps" and is now a member of the New York Jets. Is Tim Tebow the answer to Jets fans prayers? Will Tim Tebow be accepted by New York City's large liberal and secular population?

New York sports radio was aflutter yesterday with comments from listeners both for and against the trade. Jets legend Joe Namath, who took New York by storm when he led the Jets to become Super Bowl champions in 1969, called the trade a "publicity stunt" on ESPN Radio and said, "I'm sorry I just can't agree with this situation. And I'm a Tim Tebow fan, but I'm a bigger Jet fan than I am a Tim Tebow fan."

Tebow, many say, is the polar opposite to the flamboyant ladies' man Namath. Neither Mark Sanchez, the current Jets starting quarterback nor his head coach Rex Ryan made any public comments about the trade.

The news of Tebow's departure from the Denver Broncos to the New York Jets may have left a sour taste in Broadway Joe's mouth, but do all Jets fans feel the same way? How will Tebow fair in a city with so much flare?

The New York tabloids seized the moment with a full Tebow blitz with front page headlines reading, "Amen" and "God Him." Even Lady Liberty herself took a knee and "Tebowed."

When asked about the Tebow trade, New York City Archbishop Timothy Dolan chose to remain neutral, saying, "we are going to stay away from this one at this time."

On the New York Jets' official Facebook page, fan reaction was mixed. One fan who was clearly in favor wrote: Ā "Can't wait to start cheering on the Jets!! Treat Tebow well. He is a great role model for all the young and not so young men as well as girls. You will not be disappointed! God put him on your team for a reason. Just have faith and Believe."

Not everyone was as positive on the Facebook fan page, with one comment saying, Ā "The only people that like Tebow here are women, kids, and the Tebow Cult lol sad."

CNN took to the streets of New York to get the pulse of the people. Outside the New York Jets store in Manhattan, many of the fans we spoke to had mixed emotions.

Julio Moran, a Jet fan visiting New York who hails from Florida, said: "I love it. Itā€™s great. I think itā€™s good for publicity and I just think ... heā€™ll bring fire to the team. Even though Sanchez will be No. 1, heā€™ll light a fire under his butt."

When asked if Tebow can handle all that New York has to offer and stick to his religious morals, Jets fan James Colasanto said: Ā "Heā€™s different than most guys who come into the NFL, you know, where he sticks by his religion. He seems like thereā€™s nothing fake about him, so he shouldn't have any problems, I don't think, handling New York in that sense."

Some are calling the move sheer genius from a marketing perspective. Ronn Torossian, CEO and president of 5W Public Relations, said: "I think Tim Tebow can be the King. ... He comes to New York already a celebrity."

Torossian added there is a lot of rewards in New York but also lots of risks. He points out that Tebow has lived a relatively sheltered and private life and that will most definitely change in New York.

"Tebow needs to be careful of the liberal media, who he gives access to and how. One mistake in New York off the field can make his brand change very,very quickly," Torossian said.

CNN spoke to former New York Giants player Amani Toomer about Tebow coming to the Big Apple and the temptations he faces.

Whatever side of the discussion youā€™re on, one thing is certain, Jets fans in New York will have to wait until next season to see what type of Hail Mary passes Tim Tebow throws and if he is in fact their new "savior." 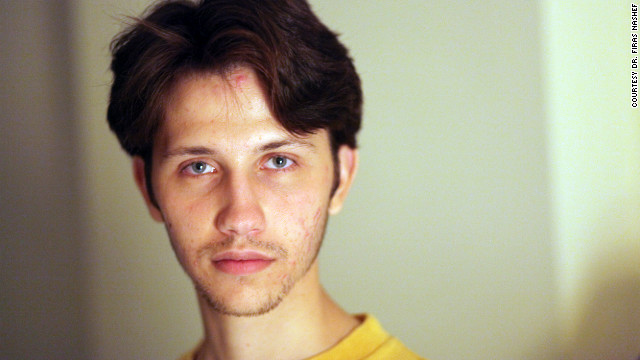 Obada Mzaik was taken into custody after flying from Detroit to Damascus on January 3, his uncle has said.
January 25th, 2012
07:07 PM ET

An Ohio-born student detained by Syrian authorities three weeks ago has been released, his family announced Wednesday.

"We're grateful that he's back with his family, and we're grateful to the community for showing support to the family during difficult days," Nashef said in a statement issued on behalf of the family. No further details were released.

Mzaik, a dual American and Syrian citizen, was studying civil engineering at a private university in the Syrian capital and had planned to pursue a master's degree in the United States, his uncle said.

Joshua Komisarjevsky was one of two men convicted of murder in the 2007 deaths of a woman and her two daughters.
December 9th, 2011
03:39 PM ET

A jury on Friday recommended that Joshua Komisarjevsky receive the death penalty for his role in a deadly Connecticut home invasion in 2007.

At a later date, a judge will weigh the jury's recommendation in sentencing Komisarjevsky, who was convicted in October on six felony charges.

Komisarjevsky's accomplice, Steven Hayes - the first defendant to stand trial in the case - was sentenced to death after a jury convicted him on 16 of 17 charges last year.

Prosecutors argued that Hayes and Komisarjevsky went into the Petit home, beat and tied up William Petit, raped and strangled his wife, molested one of their daughters and set the house on fire before attempting to flee.

The two daughters, who were both tied to their beds, died of smoke inhalation, while William Petit managed to escape from the basement, where he had been held.

JJoshua Komisarjevsky, the second man to be tried in connection with a deadly 2007 Connecticut home invasion, was found guilty on all counts during the second day of deliberations Thursday in a case that drew worldwide attention and sparked broader discussions about safety in the home.

Komisarjevsky (pictured) was convicted of 17 charges, including three counts of murder, four counts of kidnapping, and charges of burglary, arson and assault.

He could receive the death penalty.

The trial has gone on for a little over three weeks, during which time jurors heard emotional testimony detailing the deaths of Jennifer Hawke-Petit and her daughters - 17-year-old Hayley Petit and 11-year-old Michaela Petit.

The Covid-19 pandemic has now killed more Americans than the 1918 flu pandemic did. More than 675,000 people in thā€twitter.com/i/web/status/1ā€¦LN
cnni

3:46 pm ET September 20, 2021 RETWEET
While the tropics continue to pump out storms, the US coast has been spared during the last week. cnn.it/3tXGpUP
cnni

3:31 pm ET September 20, 2021 RETWEET
A monument listing 102,163 Dutch victims of the Holocaust was unveiled by King Willem-Alexander in Amsterdam on Sunā€twitter.com/i/web/status/1ā€¦jb
cnni