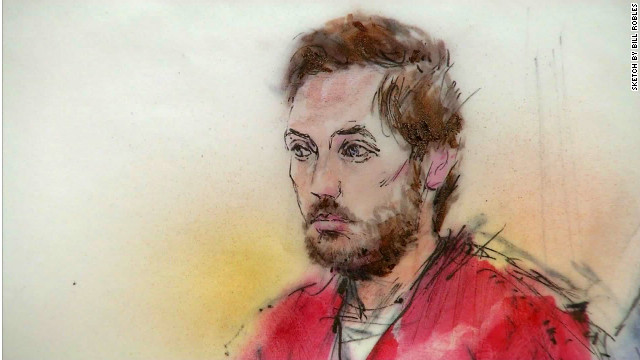 A sketch of defendant James Holmes in a Colorado court. A preliminary hearing is being held in his case this week.
January 8th, 2013
02:26 PM ET

Because the movie was still playing during the shooting and, in at least one call, the gunman was still stalking the theater, the calls are difficult to make out. In one, there's too much sound to make out what the caller was saying, but the gunshots wereÂ unmistakable: At least 30 gunshots in 27 seconds.

In another, a 13-year-old girl called to say her cousins had been shot. A 911 operator tried to lead the sobbing girl through performing CPR on one who was still breathing.

Tuesday's proceeding was a preliminary hearing for James Holmes, a 25-year-old former neuroscience graduate student accused of killing 12 people at a midnight showing of "The Dark Knight Rises" in Aurora, Colorado.

Loughner sentenced to life in prison without parole

Editor's note: Jared Loughner, the Arizona man who pleaded guilty to the January 2011 attempted assassination of then-U.S. Rep. Gabrielle Giffords, was sentenced Thursday to life in prison without parole. The shooting at a meet-and-greet in Tucson killed six people and wounded 13 others, including Giffords. Below are details from inside and outside the courthouse as we received them.

END_OF_DOCUMENT_TOKEN_TO_BE_REPLACED

Editor's note: Jared Loughner, the Arizona man who pleaded guilty to the January 2011 attempted assassination of then-U.S. Rep. Gabrielle Giffords, will be sentenced Thursday. The shooting at a meet-and-greet in Tucson killed six people and wounded 13 others, including Giffords. Her husband, Mark Kelly, will speak on her behalf at the sentencing. Below is his statement in full.

Mr. Loughner, for the first and last time, you are going to hear directly from Gabby and me about what you took away on January 8th, 2011 and, just as important, what you did not. So pay attention.

That bright and chilly Saturday morning, you killed six innocent people. Daughters and sons. Mothers and fathers. Grandparents and friends. They were devoted to their families, their communities, their places of worship.

END_OF_DOCUMENT_TOKEN_TO_BE_REPLACED

[Updated 6:44 a.m. ET] A man has been detained for questioning in a suspected arson spree in the Los Angeles area, police said Monday. It's unclear if it's the same man seen in a surveillance video released by authorities.

[Posted 4:16 a.m. ET] Los Angeles authorities released surveillance video showing a man they want to speak to in connection to a spate of wildfires in and around the city.

Michael Moriarty, a commander in the Los Angeles police department's detectives bureau, called the man on the video a "person of interest" in the investigation.

"We have video of this individual in two instances" directly tied to recent fires, he said Sunday night.

NBA standoff threatens livelihoods of workers at stadiums, nearby shops

At the Farm of Beverly Hills restaurant just down the street from the Staples Center, workers are bracing for smaller paychecks now that the first two weeks of the NBAâ€™s regular season have been canceled.

During basketball season, the restaurant depends on Los Angeles Lakers and Clippers fans for about a third of its revenue.

No games means fewer customers and fewer hours for restaurant workers, CEO Fran Berger says. Her Staples Center location is one of three restaurants her company owns in the Los Angeles area, so she doesnâ€™t plan to lay off any of her 200 employees. But she says their hours will be cut.

Although convention and concert business will help soften the blow for the 17 restaurants operating in the L.A. Live complex next to the Staples Center, Berger says, â€śthere are not many things that can fill up a 20,000-seat arena for 82 nights a year."

END_OF_DOCUMENT_TOKEN_TO_BE_REPLACED

Rick Morgan says he came close to doing Sunday what he normally does when he hears tornado sirens in Joplin: ignore them.Â Had he done so this time, he says, he probably would have died.

END_OF_DOCUMENT_TOKEN_TO_BE_REPLACED 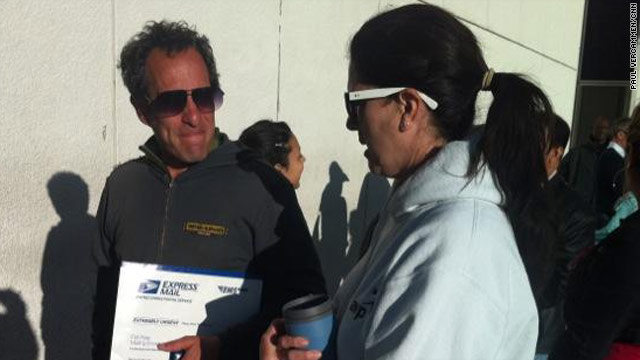