Defense rests with nothing to say in Fort Hood military hearing

Army Maj. Nidal Hasan, accused of the Fort Hood massacre last November, on Monday maintained the mystery about his thoughts, keeping silent when he and his lawyer had their chance to outline
their case.

Lawyers for Hasan brought no witnesses to the stand in the military hearing about the shootings.

Asked if he wished to make a statement, Hasan gave a barely audible "no" to the presiding officer. 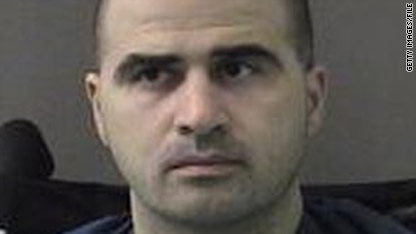 Maj. Nidal Hasan is charged with killing 13 people in a rampage last year.

The investigating officer has recessed the proceedings until November 15th, at which time the defense will have an opportunity to present its case.

[Updated at 10:18 a.m.] The prosecution said it plans to wrap up its case against alleged Fort Hood shooter Nidal Hasan on Thursday, and Hasan's legal team will present its defense in more than two weeks.

The prosecution has called more than 50 witnesses who have delivered chilling testimony about the shooting rampage that left 13 dead at a Texas military base. Hasan is the subject of an Article 32 hearing, which will determine if there is ample evidence to proceed with a court martial.

The former Army psychiatrist is charged with killing 13 people and wounding dozens more in a November rampage.

END_OF_DOCUMENT_TOKEN_TO_BE_REPLACED

A witness in the case against Maj. Nidal Hasan recalled Tuesday the sound that the accused Fort Hood shooter made as he walked down the halls of the processing center where he'd opened fire that November day.

Shell casings were wedged in the tread of Hasan's combat boots, making a distinctive "clack, clack" as he walked, said Ted Coukoulis, a civilian nurse, on the sixth day of the alleged shooter's military hearing.

Coukoulis testified in the Article 32 evidentiary hearing that will determine whether the case will proceed to a court martial and the possible death penalty for Hasan.

"It was a casual walk," Coukoulis said, comparing it to how someone would walk through a mall. "He stopped firing and started walking toward where I was - clack, clack, clack."

END_OF_DOCUMENT_TOKEN_TO_BE_REPLACED

At Fort Hood: sounds of war, memories of a massacre

The distant rumble of big guns on Fort Hood's artillery range rattles the ceiling tiles in the small military courtroom.

But the sounds of war training don't interrupt the intensity inside the military hearing as dozens of witnesses here recall that day last November when 13 people were shot to death and 32 wounded on the base in central Texas.

Training with Paladin howitzers is part of everyday life at Fort Hood, the country's largest Army base. Most of the shooting victims were preparing to ship out to the battlefields of Iraq and Afghanistan.

But nothing prepared them for what happened to them at home - dodging bullets as a gunman cut down their buddies.

[Updated at 5:19 p.m.] In response to a question about the telephone video, a Fort Hood official, who insisted on anonymity because of the ongoing criminal investigation related to the shooting, said: "Since this matter was raised during the Article 32 hearing, it is for the Article 32 hearing officer to decide whether to make further inquiries to the soldier's chain of command for additional information."

[Original post] The shooting at Fort Hood was captured on video by a soldier using his cell phone camera as he hid from the shooter, but he was ordered to erase it, the soldier said Friday.

Pfc. Lance Aviles spoke of the video as he testified on the third day of the Article 32 military hearing for Maj. Nidal Hasan, who is accused of killing 13 people and wounding 32 in the 2009 shooting.

Aviles said he was ordered by a noncommissioned officer to delete the video on the day of the shooting. He did not describe to the court what the video contained.

He said he saw the gunman stop to reload and considered rushing him. But by the time Aviles got up, he said, the shooter "had already loaded another magazine. So instead of running to him, I ran off to the right."

The Army psychiatrist accused in last year's Fort Hood, Texas, shootings faced off with the most severely injured survivor Thursday in a small military courtroom.

Maj. Nidal Hasan looked down as Staff Sgt. Patrick Zeigler described his four bullet wounds and how part of his brain had to be removed because of skull and bullet fragments.

Zeigler, using a cane, walked slowly to the witness stand at Fort Hood for the last testimony of the day in an evidentiary hearing, which is expected to last for weeks. Hasan is accused of being the gunman in the November 5 shootings that left 13 people dead and dozens wounded.

Zeigler testified he heard the gunman shout out "Allahu Akbar" just before the firing began.

"After I heard that, I pretty much froze up because I knew what that meant," said Zeigler about the phrase, which is Arabic for "God is great."

END_OF_DOCUMENT_TOKEN_TO_BE_REPLACED

Fort Hood hearing: 'All I smelled was blood'

The shooting happened so fast that is sounded like an automatic weapon, one soldier testified.

Some said they didn't realize they were wounded until they saw their own blood. And others told how they tried to play dead, hoping the gunman would pass them by.

The testimony came Thursday at Fort Hood, Texas, during the military's evidentiary hearing into the case of Maj. Nidal Hasan, who is accused of the Fort Hood shootings last November that left 13 people dead and dozens wounded.

Spc. Keara Bono testified she was reading a book in the Fort Hood building, moving through the paperwork and medical tests to deploy to Iraq. Suddenly, she said, she was wounded in the head.

"At that moment, all I smelled was blood because my face was covered with it," she testified Thursday afternoon.

END_OF_DOCUMENT_TOKEN_TO_BE_REPLACED

The panel of 7 military officers seated for the Military Commission began hearing opening statements in the case against Canadian-born terrorist suspect Omar Khadr, captured on the Afghanistan battlefield in 2002, when he was 15 years old.

The prosecution says Khadr was an enemy combatant in violation of the laws of war, that he was helping assemble and plant roadside bombs for al Qaeda and that he killed a special forces solider, Army Sgt. 1st Class Christopher Speer with a grenade. Speerâ€™s wife, Tabitha, is expected in the courtroom and will be a key prosecution witness in the sentencing phase if Khadr is found guilty. END_OF_DOCUMENT_TOKEN_TO_BE_REPLACED

Accused terrorist Omar Khadr on Tuesday briefly addressed the 15 prospective members of a military jury that will decide the case of the youngest captive at the Guantanamo Bay, Cuba, detention facility.

Dressed in a gray suit and tie, rather than his usual white prison uniform, Khadr was asked by his attorney to stand and speak to the 11 men and four women - all military officers - who are the pool for a jury of at least five members. In a soft voice, Khadr appeared to say, "How are you?" The prospective jurors sat in silence.

END_OF_DOCUMENT_TOKEN_TO_BE_REPLACED

Security Brief: Who is Omar Khadr?

The preliminary legal maneuvering in the military trial of suspected terrorist Omar Khadr serves up two starkly different images, portraying him both as a child forced into war by adults and as a committed al Qaeda fighter.

Prosecutor Jeff Groharing told the court Monday morning that Khadr was aware of al Qaeda ideology. "He embraced it and used it to justify his own activities," Groharing said.

At the same time Pentagon-appointed defense attorney, Lt. Colonel Jon Jackson, has repeatedly called Khadr a "child soldier" who was forced into fighting in Afghanistan by adults and later threatened with rape and death if he did not provide statements to U.S. interrogators. END_OF_DOCUMENT_TOKEN_TO_BE_REPLACED

More armed guards were visible early Monday morning near where two war crimes proceedings were set to begin for two terrorism suspects at the Guantanamo Bay Naval Base in Cuba.

But apart from the boost in security, there was little outward sign that the first full Military Commission of the Obama administration was almost under way.

Canadian-born terrorism suspect Omar Khadr, who was captured on the battlefield in Afghanistan when he was 15 years old, arrived in the courtroom early Monday morning, according to Joe DellaVedova of the Office of the Military Commission.