The winner of last week's $338 million Powerball jackpot is expected to appear in a New Jersey court Monday on a warrant for unpaid child support.

Pedro Quezada, 44, the father of five children ages 5 to 23, owes back child support totaling $29,000, according to William Maer of the Passaic County Sheriff's Office. It is not clear which children would be covered by the payments.

It is now at least 113. Â The New York City Office of Chief Medical Examiner raised that city's death toll today to 43.

A 77 year-old man from the Far Rockaway neighborhood in Queens fell down a flight of stairs November 6 and later died at a hospital, the examiner's office said. Â Also, a 66 year-old man was found in his Staten Island home on Friday - 11 days after the storm. Â He had drowned. 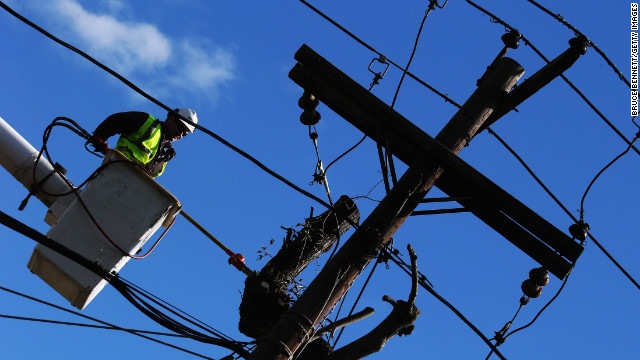 Law enforcement authorities, including the FBI and the NYPD, are investigating the origins of an online posting that pictured a cityscape of New York with the words "Al Qaeda. Coming Soon Again in New York."

The graphic image surfaced Monday on a few jihadist websites, featuring the words in the English, and has prompted officials to investigate who posted it.

FBI spokesman J. Peter Donald said that while his agency was investigating, "there is no specific or credible threat to New York at this time."

[Updated at 11:40 a.m. ET] If you were hoping to be done with winter,Â Punxsutawney Phil had some bad news for you on Thursday.

After the groundhog was summoned from hisÂ burrow at the Gobbler's Knob hill in Punxsutawney, Pennsylvania, observers proclaimed that "the prognosticator of all prognosticators" had seen his shadow.

"Many shadows do I see, six more weeks of winter it must be," a member of Phil's "Inner Circle" said as a crowd erupted in boos.

The tradition goes back to medieval times when there was a superstition that all hibernating animals emerged from their caves and dens to check the weather on Candlemas, which is halfway between the winter solstice in December and the vernal equinox in March. If the animals saw their shadows, winter would go on for another six weeks, and they could go back to sleep, according to the tradition.

But if there was no shadow, spring would come early, according to the tradition.

Not every groundhog agreed with Phil on Thursday. At New York's Staten Island Zoo, for example, New York Mayor Michael Bloomberg told several hundred observers that Staten Island Chuck didn't see his shadow, and that therefore an early spring was on its way.

The Staten Island event has happened for 31 years. Punxsutawney's celebration goes back 126 years.

Up to 18,000 people attended the Punxsutawney event Thursday, CNN affiliate WTAE-TV in Pittsburgh reported. The annual celebration 65 miles northeast of Pittsburgh, starting with various events the weekend before Groundhog Day, provides a sizable boost to the local economy. As many as 30,000 visitors come to town for the event on any given year, the Pennsylvania Tourism Office's Quinn Bryner said.

The 2,600 rooms available for guests in Jefferson County and surrounding counties usually sell out, Bryner said. And the event adds $1 million to the area each year, according to the Punxsutawney Chamber of Commerce.

Much of the United States has seen an unseasonably warm winter, so Phil's prediction may come as a surprise to some.

How much stock would you put in this year's prognostication?

Here's what Phil indicated in the last few years, according to Groundhog.org:

2009:Â "Phil saw his shadow and Inner Circle President Bill Cooper completed his final interpretation and retired at Gobbler's Knob. It was 7:26 a.m."