One in four US workers have filed for unemployment since the pandemic hit, as another 2.1 million people filed joblŌĆtwitter.com/i/web/status/1ŌĆ”l7 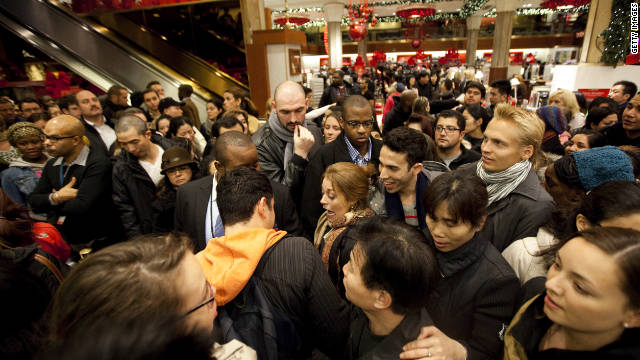 Big crowds, big mischief on Black Friday (and Thursday, too)

With more big-box stores starting their Black Friday sales at midnight and even pulling them into Thanksgiving Day, the kickoff to the holiday shopping season ŌĆō and the scattered reports of scuffles and mischief that inevitably come with it ŌĆō was in high gear early.

Some stores opened earlier than ever: Toys R Us opened at 9 p.m. Thursday, with Walmart opening at 10 p.m. and Target, KohlŌĆÖs, Best Buy and MacyŌĆÖs opening at midnight. And some reported longer lines than usual, according to CNNMoney.

The early openings didnŌĆÖt make everyone happy, as employees with Target and Best Buy signed online petitions complaining that they had to sacrifice too much of their Thanksgiving. But shoppers seemed to be motivated for one of the biggest sales days of year. About 23% of Americans say they plan to go shopping on Black Friday, up from 19% in 2006, according to a CNN/ORC International poll.

With Black FridayŌĆÖs massive crowds and long lines come a few reports of short tempers, fights and robberies, and this year has been no exception.

In California on Thursday night, one woman doused fellow shoppers with pepper spray in a bid to snag a discounted video game console at Walmart in Los AngelesŌĆÖ Porter Ranch area, police said. Ten people were treated at the scene for exposure to the spray, police said.

The woman was trying to get an Xbox video game console, CNN affiliate KABC reported, citing police. She was able to pay for her purchases and leave the store before police arrived, Chavira said.

END_OF_DOCUMENT_TOKEN_TO_BE_REPLACED

Not even close at this point nytimes.com/interactive/20ŌĆ”
susancandiotti

2:24 pm ET May 27, 2020 RETWEET
ŌĆ£ŌĆ£Being black in America should not be a death sentence,ŌĆØ the cityŌĆÖs mayor said as video of the arrest was witwitter.com/i/web/status/1ŌĆ”gGa2Im1oI5
susancandiotti