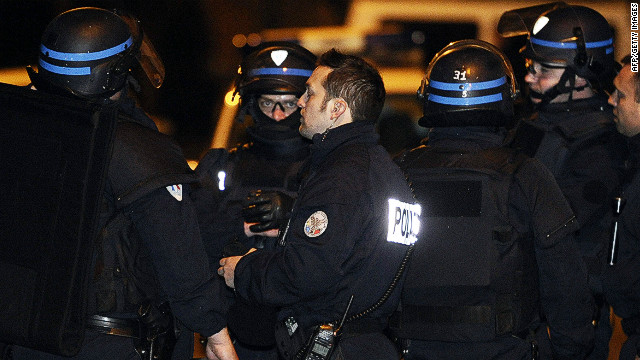 Members of the RAID special police forces lay siege to the area where suspect Mohamed Merah was holed up.
March 22nd, 2012
07:14 AM ET

[Updated at 7:14 a.m. ET] The suspect in the killing of seven people in and around the southern French city of Toulouse is dead after a police siege of his apartment lasting more than 31 hours, French Interior Minister Claude Gueant said Thursday.

Merah, 23, was wanted in the killings of three French paratroopers and of three students and a rabbi at a Jewish school in Toulouse, in a string of shootings that began on March 11. Gueant said earlier police wanted to capture him alive.

"We hope that he is still alive," Gueant said overnight. "We have a priority to hand him over to the authorities."

But they had no contact overnight with Merah.
Police fired stun grenades at the building every hour through the night, but there was no response. They launched a raid amid gunfire around 11:30 a.m. (6:30 a.m. ET) and Gueant announced the suspect's death soon afterward.

[Posted at 4:31 a.m. ET] French authorities have had no contact overnight with Mohammed Merah, who is suspected in seven recent killings and is holed up in an apartment in the southern French city of Toulouse.