The best way to ensure Syria doesnŌĆÖt use chemical weapons against rebels is not military action, but offering SyriaŌĆÖs president a way out of the country - and persuading him to take it - a former NATO supreme commander says.

"You could take out the airfields if (the weapons) are uploaded ŌĆ” but nothing is going to be 100% effective," Clark said. "The most effective preventive weapon is to use this as greater leverage against the Russians and Chinese to cut all support for Bashar Assad, get him out of the country, get him into some kind of asylum situation somewhere, and sort this out."

END_OF_DOCUMENT_TOKEN_TO_BE_REPLACED 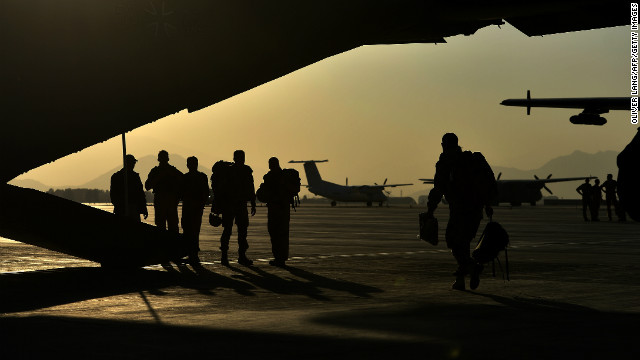 (File photo) Soldiers of the German Army Bundeswehr stand next to a cargo plane in Kabul, Afghanistan on November 12.
December 6th, 2012
02:53 AM ET

The German Cabinet has agreed to send Patriot missiles and up to 400 soldiers to Turkey to deter the Syrian civil war from spilling into the country.

The cabinet decision, made in a special session today, follows a move by NATO foreign ministers Tuesday ┬Āto approve Turkey's request for such missiles.

Turkey asked NATO to deploy Patriot missiles along its border to bolster its air defenses against Syrian threats.

In addition to Germany, the United States and Netherlands - both of which have Patriot capabilities - have signaled they would be willing to contribute missiles.

ŌĆ£Any deployment will be defensive only. It will in no way support a no-fly zone or any offensive operation," the NATO statement said.

The decision was made as news surfaced about fears of Bashar al-Assad's government using chemical weapons.

The man accused of killing 77 people in a bomb-and-gun rampage in Norway last summer claimed as he went on trial for terrorism and murder Monday that self-defense justified his actions.

"I acknowledge the acts but do not plead guilty, and I claim I was doing it in self-defense," Anders Behring Breivik told a court in Oslo. The court recorded a plea of not guilty for him.

Prosecutors played a recording of a terrified girl phoning for help during the shooting spree that left 69 people dead, many of them teens and young adults. The audio was punctuated by constant firing in the background.

They also showed security camera video of the central Oslo bomb blast that killed eight people, images that participants in the trial watched with ashen faces.

At least three US Army bases are now offering incentives for soldiers to receive the Covid-19 vaccine, including adŌĆtwitter.com/i/web/status/1ŌĆ”k8
cnni

9:40 pm ET May 13, 2021 RETWEET
A letter written by Albert Einstein that includes the world's most famous equation is being auctioned with an estimŌĆtwitter.com/i/web/status/1ŌĆ”bs
cnni

9:28 pm ET May 13, 2021 RETWEET
The desirability of an Herm├©s Birkin handbag ŌĆö a symbol of rarefied wealth ŌĆö is such that not even a global pandtwitter.com/i/web/status/1ŌĆ”BCGOT8K
cnni

9:06 pm ET May 13, 2021 RETWEET
CVS, Walgreens and Macy's said they are reviewing their requirements for facial coverings following new US CDC guidŌĆtwitter.com/i/web/status/1ŌĆ”J4
cnni

8:27 pm ET May 13, 2021 RETWEET
Apple parted ways with a new employee this week after thousands of workers petitioned the company to investigate hoŌĆtwitter.com/i/web/status/1ŌĆ”kf
cnni