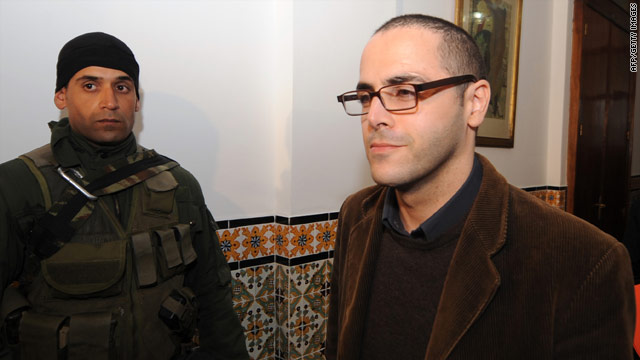 The dissident blogger said he was being psychologically tortured in Tunisia earlier this month, according to several media outlets. He was reportedly told that screams emanating from beyond a wall in an Interior Ministry office were the cries of his family members being tortured.

Today, Amamou is Tunisia’s minister of youth and sports – a fitting role reversal for a cog in Tunisia’s lightning-fast, social media-fueled revolution.

The 33-year-old CEO of a Web development company was arrested January 6 with another blogger and accused of being part of a conspiracy to destroy government sites, Al-Jazeera reported.

He was released January 13, the day before President Zine al-Abidine Ben Ali fled the country. Minutes before the Cabinet was announced, Amamou was offered a position in the interim government, Al-Jazeera said.

He has since been using his blog as well as his Facebook and Twitter accounts - the same weapons he used to sound off about government abuses and his own arrest - to send out reports on the new government, even on closed-door meetings, The New York Times said. His postings are in French, Arabic and, sometimes, English.

His first conflict with the Constitutional Democratic Rally, Ben Ali’s party, was over his failure to wear a tie, The Times said.

“I like the minister of justice,” he tweeted later. “I am going to wear a tie just to please him.”

He also caught some flak from his followers when he said the members of the president’s party shouldn’t be rejected from the government. It’s a coalition government, he wrote, so people won’t be in total agreement over its makeup, The Guardian in London said.

As for criticism aimed at his transition from revolutionary to minister, he said it is not a career move. He is doing it for his country and to keep an eye on the interim government until elections can be held. He also wants to persuade other Cabinet members to sign up for Twitter, The Times reported.

“It is similar to an underground artist who signs with a major label and is criticized by the purists and the masses,” he wrote, describing the criticism.