The US military has carried out air strikes in Syria targeting an Iranian-backed militia site, the first known miliŌĆtwitter.com/i/web/status/1ŌĆ”m7

Laid-off workers will be allowed to turn down jobs they think are too risky because of Covid and continue to collecŌĆtwitter.com/i/web/status/1ŌĆ”3c

The FDA has given permission for the Pfizer vaccine to be stored at normal freezer temperatures, a decision that caŌĆtwitter.com/i/web/status/1ŌĆ”qX

Ex-USA Gymnastics coach John Geddert, who had ties to Larry Nassar and was charged with human trafficking and sex cŌĆtwitter.com/i/web/status/1ŌĆ”cS

India has issued strict new rules for Facebook, Twitter and other social media platforms weeks after the country'sŌĆtwitter.com/i/web/status/1ŌĆ”AG 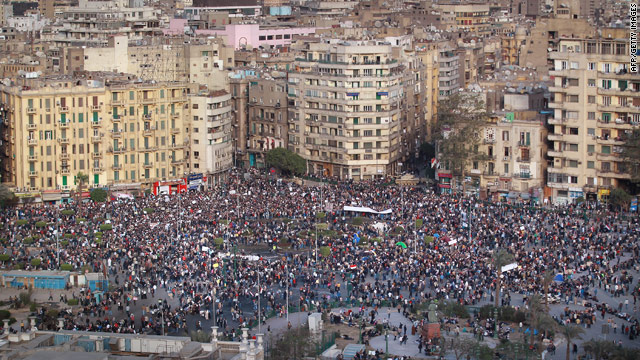 Egypt: How did it get to this point?

As the protests in Egypt reach Day 7, CNN takes a look back at how they have unfolded.

On the heels of anti-government demonstrations in Tunisia, thousands of protesters spilled into the streets of Egypt in a rare display of anti-government outcry. CNN reporters on the scene witnessed throngs of people in Cairo march from Tahrir Square to the parliament building. Demonstrators threw rocks at police, who threw them back and shot tear gas at the protesters, who also reciprocated.

The protest's organizers said they wanted to mirror the uprising in Tunisia, which 10 days prior had precipitated the end of President Zine El Abidine Ben Ali's 23-year rule. Before the protests in Cairo, several Egyptians set themselves or tried to set themselves on fire earlier in the month, which also was reminiscent of Tunisia, where a man's self-immolation spurred the uprising.

The Egyptian protesters - who included young and old, Christians and Muslims, students, workers and businesspeople - said they were angry over the cost of living, failed economic policies and corruption. They demanded that President Hosni Mubarak, in power for three decades, follow the lead of Tunisia's president.

"We breathe corruption in the air," said one demonstrator.

At day's end, three protesters in the port city of Suez and a police officer in Cairo were killed. Forty-nine people were injured, according to news reports.

END_OF_DOCUMENT_TOKEN_TO_BE_REPLACED

Baarack, a sheep with over 30 kg (66 pounds) of wool that had been wandering around the Australian bushland for yeaŌĆtwitter.com/i/web/status/1ŌĆ”pr
cnni

5:27 am ET February 26, 2021 RETWEET
Tiger Woods has been transferred to a second Los Angeles-area hospital for "continuing orthopedic care and recoveryŌĆtwitter.com/i/web/status/1ŌĆ”kz
cnni

5:00 am ET February 26, 2021 RETWEET
The Dutch parliament has passed a non-binding motion saying the treatment of the Uyghur Muslim minority in China amŌĆtwitter.com/i/web/status/1ŌĆ”IJ
cnni