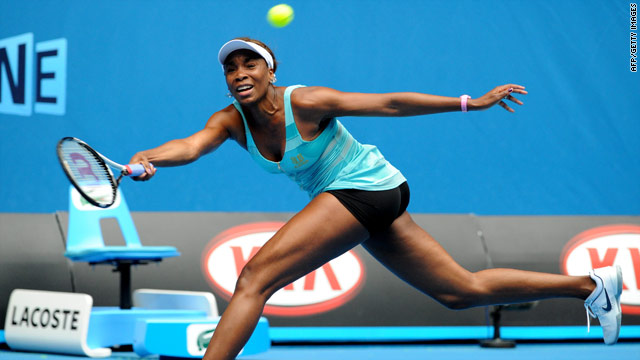 The elder Williams sister is at the Australian Open without her sister Serena, and she dismantled Sara Errani in straight sets, yet the storyline on the 30-year-old tennis champ revolved around a little blue dress.

The aqua blue number with horizontal stripes prompted a Yahoo! Sports columnist to opine that the “length of Venus Williams’ hemline is inversely proportional to the tennis star’s age: as she gets older, the dresses get shorter.”

The New York Daily News penned the verbose headline, “How short is that skirt? Venus Williams’ mini-dress at Australian Open turns heads.” The Daily Telegraph’s headline stated, “The sheer cheek of it,” and another site proclaimed that Williams had gone skirtless at the Grand Slam event.

Let’s not feign surprise. It's hardly the first time that Williams has caused a stir with her uniform. She and her sister take pride in their unique appearances on the court.

In September, she wore a sparkly fuchsia dress (with a sparkly, black undergarment) that was so tight commentator Mary Carillo said, “She uses that fabric a lot in her designs … and for the last couple of years we’ve seen her have to correct her outfit after every point.”

At last year’s Australian Open, Williams opted to wear flesh-colored underwear. When she stretched for a fore- or backhand, it gave the impression that she was in the buff under her tennis dress.

She told the Daily Mail that she designed that outfit herself. She is, after all, a fashion designer and interior designer.

Williams wore the supposedly scandalous underwear the year after the Melbourne tournament banned skimpy dresses following an incident in which French teen Alize Cornet wore a see-through top during a doubles match leading up to the tourney.

Unfortunately, it appears that a woman’s choice of dress often outplays her prowess on the court. Look no further than the Daily Mail report on Maria Sharapova’s dress for this year's open.

Noting that it is less revealing than the dresses she usually wears, the newspaper mused that this design would come “much to the disappointment of her male fans.”

END_OF_DOCUMENT_TOKEN_TO_BE_REPLACED

The U.N. high commissioner for human rights says she has a good reason for not attending the Nobel Peace Prize ceremony for jailed Chinese dissident Liu Xiaobo.

Yang Jianli, another Chinese dissident who represents Liu before the Nobel committee, isn’t buying it. He called Pillay's decision not to attend “a clear and unequivocal abdication of her responsibilities as high commissioner.”

Though Yang claims that the U.N. is buckling to pressure from China, Colville said Pillay – a South African lawyer who got her start defending opponents of apartheid – simply couldn’t bow out of the Swiss event.

According to BBC, 19 countries including China will not attend the ceremony in Oslo, Norway. Forty-four will attend.

Foreign Ministry spokesman Jiang Yu told the BBC that China would not change because of “interference by a few clowns.”

China has mounted a campaign to dissuade nations from attending the ceremony and said through its state-run media that 100 countries back its stance. Xinhua further cited a professor as saying that Liu was a “Chinese criminal [who] challenged China’s judicial authority and interfered in China’s internal affairs."

The Nobel Committee, of course, sees it differently and applauds Liu’s calls for multi-party democracy and human rights reforms.

In other developments this week: Liu’s lawyers said they were prevented from appealing their client’s charges; they say they were also prevented from visiting Liu’s wife, who has been under house arrest since the Nobel announcement; and an Australian-based Chinese dissident was detained in Shanghai en route to Oslo, The Australian reported.

END_OF_DOCUMENT_TOKEN_TO_BE_REPLACED 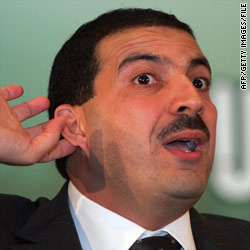 He despises radical Islam as much as anybody, and he has the power to do something about it.

Khaled landed in Sana’a, Yemen, on Tuesday to kick off his training course on moderation for preachers and other leaders. The project will target 70 preachers from across the country.

“The projects will focus on spreading Islamic thought and moderation as well as fighting extremism and violence,” Yemen’s state-run news agency, Saba, reported. “One of them, Balda Tayeba, targets Yemeni young leaders to train them to spread moderation thoughts and projects directing the youth to do good and reform and root out extremism through charitable projects.”

Middle East Online said Khaled and the selected preachers will confront extremism and al Qaeda-like ideologies via television interviews, meetings with army leaders and "interviews with some penitent extremists."

“[Osama] bin Laden is saying he is talking on behalf of Muslims,” he was once quoted as saying. “Who asked him to talk on behalf of us? Nobody.”

He has spoken extensively on how Muslims can tap their faith and activism to integrate into Western societies, yet he still holds some traditional Muslim views (women should wear headscarves, for example).

Time magazine in 2007 compared the 43-year-old Egyptian layman to Dr. Phil and Rick Warren and said he was among 100 people whose power, talent or moral examples were transforming the world.