The gunman in the Texas elementary school shooting wasnāt confronted before entering the school, an official says.twitter.com/i/web/status/1ā¦RtLB

The Supreme Court will allow the Biden administration to continue to use a metric that estimates the real-world cosātwitter.com/i/web/status/1ā¦rb

Former President Trump and his children Ivanka and Donald Jr. must sit for depositions in NY attorney generalās civtwitter.com/i/web/status/1ā¦dJHg 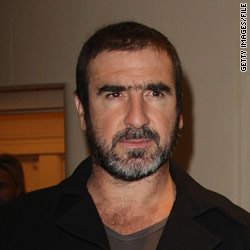 During his heyday, āKingā Eric was known for shredding the backs of soccer nets and toppling the occasional teammate, fan or opponent.

Now, the French icon and Manchester United player of the century wants to deal out the same treatment to his nationās banks.

Responding to the austerity protests in his homeland, the 44-year-old downplayed the effectiveness of picketing and suggested that, instead, protesters should spark a revolution by divesting banks.

āI don't think we can be entirely happy seeing such misery around us - unless you live in a pod,ā he said in a recent interview. āNowadays what does it mean to be on the streets? To demonstrate? You swindle yourself. Anyway, that's not the way any more.ā

Cantona, however, was quick to dismiss violence as a way to effect change, which might be interesting to soccer fans who saw him karate kick a Crystal Palace fan in 1995.

āWe don't pick up weapons to kill people to start the revolution,ā he said, according to Londonās The Guardian, which reported on his interview with a French-language newspaper. āThe system is built on the power of the banks, so it must be destroyed through the banks.ā

The idea is not Cantonaās, by any means. French activists have been calling for a December 7 bank run since at least October. A few Facebook groups have popped up in support, including one called StopBanque.

If you can stand a little naughty language and the English captions, you can watch Cantona explain the idea and the need for social and economic revolution on YouTube. But some say his prediction that mass withdrawals could bring down banks is a bit lofty. One economic expert told the BBC itās not likely to work.