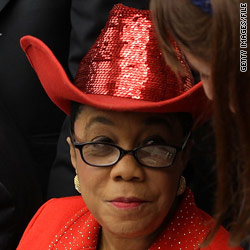 The Florida Democrat hasnŌĆÖt even taken office, but she is already gearing up for a fight over an age-old U.S. House rule.

Wilson is a connoisseur of hats, especially sequined cowboy ones, and she doesnŌĆÖt take kindly to being told that the House doesnŌĆÖt cotton to its members rocking Stetsons in its chamber.

ŌĆ£It's sexist,ŌĆØ Wilson told The Miami Herald. ŌĆ£It dates back to when men wore hats, and we know that men don't wear hats indoors, but women wear hats indoors. Hats are what I wear. People get excited when they see the hats. Once you get accustomed to it, it's just me. Some people wear wigs or high heel shoes or big earrings or pins. This is just me.ŌĆØ

Wilson had to take off her hat for her official congressional picture, a ruling she said she plans to appeal.

The odds are against the flamboyant freshman, according to PolitiFact. The hat ban has been in place since 1837, and was upheld during the 1970s when Rep. Bella Abzug pushed to sport her trademark broad-rimmed hats.

It will likely take a full House vote to overturn the rule, PolitiFact reported.

But Wilson does not seem deterred. Though she recently said she doesnŌĆÖt know how many hats she owns, she told the Tampa Bay Times last year that she owns about 300, some of which are custom-dyed to match her suits.

Though it would be unreasonable to expect a photo gallery of all the hats, which take up an entire room in her house, the Miami New Times is showcasing 25 of its favorites.