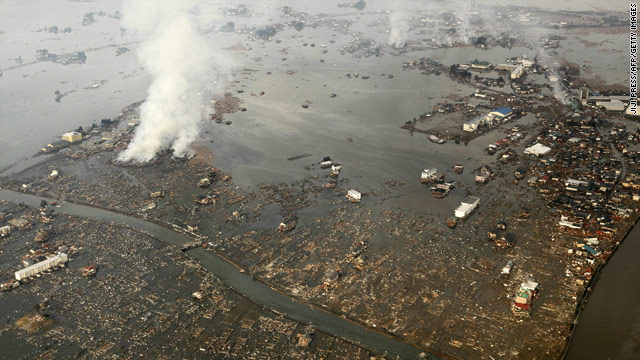 A view of flooding and destruction in Natori city, Miyagi prefecture, Saturday, after a tsunami was unleashed by an 8.9 quake.
March 11th, 2011
11:01 PM ET

An 8.9-magnitude earthquake hit northern Japan today, triggering tsunamis that sent a wave filled with boats and houses toward land. Hawaii and the U.S. West Coast are under a tsunami warning. Are you in an affected area? Send an iReport. Read the full report on how the quake hit Japan and generated a Pacific-wide tsunami.

[10:01 p.m. ET, 12:01 p.m. Tokyo] As rescue crews continue to account for the damage caused by the country's largest earthquake on record, people in Japan on Saturday are struggling to contact loved ones near the hardest hit areas.

Lucy Craft, a freelance correspondent in Tokyo, has a teenage son at a high school near the epicenter in Sendai, northeast of Tokyo. More than 18 hours after the quake, she hadn't been able to make contact.

Roads and buildings showed cracks as far away as 200 kilometers (125 miles) from Sendai, the closest city to the epicenter. One man told CNN the scene in towns hit by the quake and the resulting tsunami was "unimaginable."

Shoppers were polite but tense as they sought food, water and gasoline from stores where shelves were quickly emptied and pumps soon ran dry.

[9:20 p.m. ET, 11:20 a.m. Tokyo] ’╗┐At least 200 people are dead in Japan, 700 are missing, and the death toll is increasing every hour since a devastating earthquake hit the country Friday, Japan's ambassador to the United States said.

"This is the most terribible earthquake we've had," Ichiro Fujisaki told CNN's Piers Morgan. "This is a terrible incident that has hit Japan."

At least six million homes are without electricity, accounting for about 10 percent of Japan's households, he said. The government is responding to recovery efforts with 8,000 self-defense forces, and the Coast Guard is contributing 300 ships and 40 airplanes, he said.

"We are mobilizing all we can."

[8:30 p.m. ET, 10:30 a.m. Tokyo] ’╗┐Ecuadorian President Rafael Correa ordered the evacuation of the Galapagos Islands and of cities along the country's coast Friday.