TV Azteca reporter Ines Sainz has been making the media rounds, giving her take on what happened between her and the New York Jets football team on the field and later in the locker room that prompted reports of sexual harassment.

The story broke Monday with reports that the NFL was investigating whether Jets players behaved inappropriately by allegedly hooting and hollering at Sainz when she visited the team's locker room for an interview with Mark Sanchez onÂ Saturday.Â

Since then, the Sainz saga has been splashed across newspapers with the typical tabloid-style headlines - perhaps because she is a former Miss Spain, or the self-proclaimed "hottest sports reporter in Mexico," or because she has posed in Maxim.Â Â

Washington Redskins running back Clinton Portis kept the story alive TuesdayÂ with comments on the Mike Wise Show about locker room dynamicsÂ (comments start around 14:00). Subsequent backlash from the NFL prompted Portis to acknowledge he was "wrong to make the comment," adding that he respects "the job that all reporters do."Â

It was the most recent apology Sainz has fielded this week, after hearing from Jets owner Woody Johnson. Sainz says she has accepted the apologies and hopes toÂ put the harassment issue behind her.Â

But the furor continues on talk shows, on the Web and in social media.Â It has sparked intense debate online - and on CNN comment boards.Â Â

END_OF_DOCUMENT_TOKEN_TO_BE_REPLACED 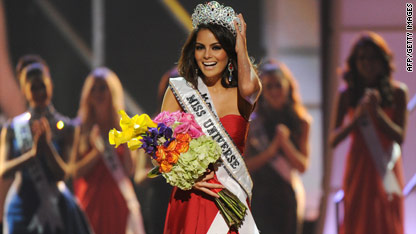 Miss Mexico Jimena Navarette was crowned Miss Universe Monday to the delight of her entire nation.

Jimena Navarette, Miss Mexico, was crowned the winner at the Miss Universe pageant Monday night - an achievement the 22-year-old, the president of the country and her fellow country members hoped would boost the image of Mexico.

"I want the whole world to know about my country and my people," Navarette, who is from Guadalajara, Mexico said after winning the crown in Las Vegas to wide applause from a delegation there to support her.

Support and cheers from Mexicans flooded the internet quickly - with President Felipe Calderon being among the first to congratulate Navarette via Twitter on her "deserved victory," saying that it would help the country's image.

"Her triumph is a source of pride and satisfaction for all Mexicans, who see in her the fruits of perseverance," Calderon also said in a statement.

With the win, Navarette became the second Miss Mexico to capture the crown. Lupita Jones won the title in 1991.

"We won, long live Mexico!" Navarrete said on her Facebook fan page, which has grown into a page of tributes and cheers to Navarette and her country.

END_OF_DOCUMENT_TOKEN_TO_BE_REPLACED

JUST IN: The House has voted to hold Steve Bannon, one of former US President Donald Trump's closest allies, in criâ€twitter.com/i/web/status/1â€¦rp
cnni

4:19 pm ET October 21, 2021 RETWEET
All of California is now under a drought emergency, officials said, after the state saw its driest year on record iâ€twitter.com/i/web/status/1â€¦Bf
CNNweather

3:49 pm ET October 21, 2021 RETWEET
London has more public sculptures of animals than it does of women or people of color, a new study has revealed. Aâ€twitter.com/i/web/status/1â€¦WX
cnni