A senior operative of al Qaeda in the Arabian Peninsula wanted for his role in the USS Cole bombing was killed by an airstrike in Yemen on Sunday, the Yemeni Embassy in Washington said.

Fahd al Quso, 37, was killed in Shabwa province, according to the embassy.

In addition to being one of the most-wanted terrorists in Yemen, the FBI had offered a $5 million reward for any information leading to al Quso's capture.

Al Quso was indicted by a federal grand jury in New York in 2003 on 50 counts of terrorism offenses for his role in the October 12, 2000, bombing of the USS Cole in Aden, Yemen. The bombing killed 17 U.S. sailors. 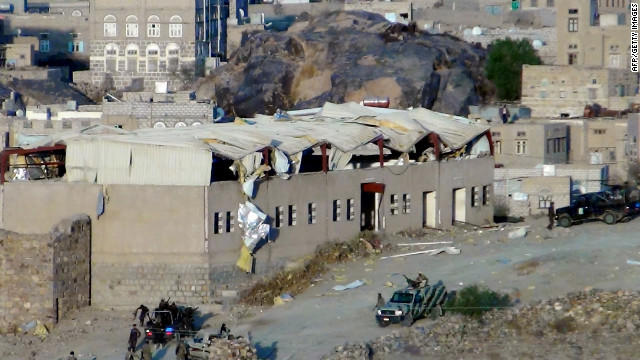 Yemeni soldiers gather at the site where two suicide bombers blew up a vehicle at an elite Republican Guard camp in Bayda.
March 6th, 2012
09:17 AM ET

The death toll from a sophisticated attack by Islamic extremists against soldiers in Yemen jumped to 177 Tuesday, three Yemeni security officials told CNN.

Air raids on militant positions since the attack have left at least 42 militants dead in Abyan province, security officials said.

The attack Sunday at an army base by Ansar al-Sharia, which is allied with al Qaeda in the Arabian Peninsula (AQAP), originally claimed the lives of 90 soldiers and wounded many others.

She vowed that the United States will continue to support Yemen's new President Abdurabu Hadi "and the Yemeni people as they work to realize their aspirations for a brighter and more prosperous future."

The attack was a humiliating defeat to Yemen's army in a power struggle against AQAP.

The militants seized large amounts of weaponry - including rocket launchers, mortars, armored vehicles, and tanks - and appeared to have had help from within the security apparatus, according to Yemeni officials.

The bloodbath took place near Zinjibar, a town on the Arabian Sea where Ansar al-Sharia has been active for nearly a year.

Dozens of suspected al Qaeda militants escaped from a jail in the Yemeni city of Mukalla Wednesday, according to a senior security official.

CNN could not independently verify that the escapees were members of al Qaeda.

A soldier and a prisoner were killed and two soldiers were injured in the incident, said the security official who asked to remain anonymous because he is not authorized to speak to the media.

Armed militants began attacking the prison at about 8 a.m. Wednesday, witnesses said. They fired heavy artillery before the escape.

Recent clashes in the southern province of Abyan killed seven Yemeni soldiers and 17 militants. The fighting was mainly concentrated in the cities of Zinjibar and Jaar.

Government troops have been battling both anti-government tribal forces and Islamic militants, including al Qaeda in the Arabian Peninsula.