The White House says US District Court Judge J. Michelle Childs is one of the people President Biden is considering‚Ätwitter.com/i/web/status/1‚Ä¶V8

The House Select Committee investigating January 6 has issued a subpoena for a former White House spokesman with fi‚Ätwitter.com/i/web/status/1‚Ä¶rv

January 6 committee subpoenas 14 Republicans who served on bogus slates of Trump electors as part of a scheme to su‚Ätwitter.com/i/web/status/1‚Ä¶UW

Blizzard warnings expand to include 10 million people across 10 states. These are the latest forecast numbers to kn‚Ätwitter.com/i/web/status/1‚Ä¶i4

A bridge in Pittsburgh has collapsed. No injuries reported, but police are asking residents to stay away over conce‚Ätwitter.com/i/web/status/1‚Ä¶LE

A federal judge has invalidated the Biden administration‚Äôs oil and gas leases for 80 million acres in the Gulf of Mtwitter.com/i/web/status/1‚Ä¶ayL2

RT @CNN: Justice Stephen Breyer has written a letter to President Biden informing him of his intent to retire from the Supreme Court https:‚Ä¶ 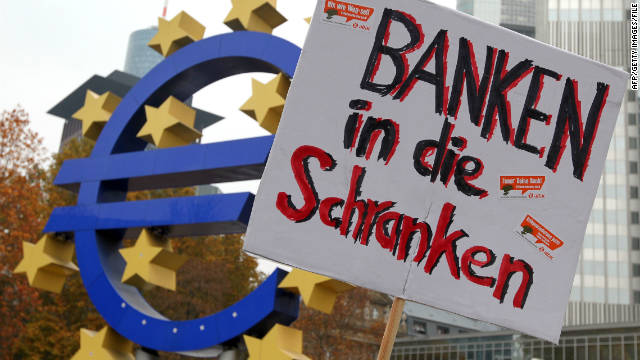 A German banner says to "Bring banks back in line" at a recent protest outside the European Central Bank in Frankfurt, Germany.
November 30th, 2011
11:05 AM ET

Editor's note:¬†The U.S. Federal Reserve, acting with other nations' central banks, took steps Wednesday to support the global financial system with a¬†coordinated plan to lower prices on dollar liquidity swaps beginning on December 5 and extending these swap arrangements to February 1, 2013.¬†CNN's¬†international business correspondent Richard Quest¬†takes a look at how big of a help the plan is and what more might need to be done to ease the eurozone crisis.

It is time for a reality check on what was announced Wednesday morning.

In the highly complex world of banking, this move to ease access to dollars is the equivalent of adding oil and grease to the wheels of the system. The banks are lending and borrowing from each other on an hourly basis,¬†frequently in foreign currencies. In recent weeks, it has been more difficult to get hold of currencies as a crisis of confidence takes its toll.

The so-called swap lines (where one central bank borrows foreign currency from another) have been around since May 2010. Today they have eased the price at which that money is lent to banks, and they have made it easier to borrow across the range of currencies. For instance, a bank in Frankfurt, Germany, needing yen can get it more quickly; the Swiss can get dollars; and the Japanese can get euros and so on.

This will all make it easier for banks to get on with the daily business of lending between each other - it greases the wheels - but it does not address the fundamental problems of the eurozone.

I don't see any moral hazard issue (a term in economic theory¬†for a situation where there's an incentive to¬†share a risk) in this announcement. They are not saying the banks are too big to fail - they are saying the system is too fragile to seize up. It is a sensible, moderate and proportionate response. What is lacking from the Europeans is a credible, long-term solution to the crisis. And from the Americans, a long-term solution to the debt debacle. Only when these are solved will there be the remote possibility of business as normal.

Olli Rehn, the European commissioner for economic and monetary affairs, said Wednesday that we are entering a critical period of 10 days to complete and conclude the crisis response of the European Union - its very own 10 Days of¬†Christmas.

And each day I will write about what the gift or groan is for that day.

3:01 am ET January 29, 2022 RETWEET
China has touted its newly completed Olympic ski venue as an example of its commitment to making the Beijing Games‚Ätwitter.com/i/web/status/1‚Ä¶wW
cnni

2:01 am ET January 29, 2022 RETWEET
For the first time in its 85-year history, NASA's Jet Propulsion Laboratory has a female director. Geochemist and‚Ätwitter.com/i/web/status/1‚Ä¶a2
cnni

1:01 am ET January 29, 2022 RETWEET
A woman says a TikTok video that was labeled as showing Gastonia, North Carolina, tricked her into driving to the c‚Ätwitter.com/i/web/status/1‚Ä¶S7
cnni

12:31 am ET January 29, 2022 RETWEET
After a six-month undercover investigation, authorities in Florida have charged 68 people in connection with the sa‚Ätwitter.com/i/web/status/1‚Ä¶Z5
cnni