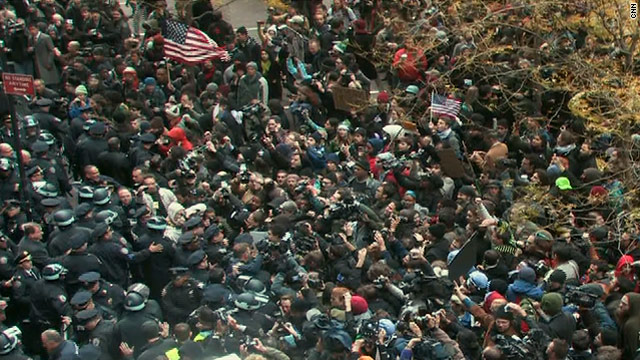 [Updated at 8:53 p.m. ET] A total of 245 Occupy Wall Street demonstrators were arrested Thursday in New York, including 64 arrested during an early evening sit-in on Centre Street near Foley Square in lower Manhattan, a police spokesman said.

Earlier Thursday, New York police spokesman and protest organizers said that 99 people were arrested during the same sit-in. In fact, 64 were arrested - all of them wearing 99% t-shirts - in that incident.

Occupy Wall Street organizers had said that 99 people were prepared to be sit down in a street and be arrested - a symbolic number, as the activists purport to represent the interests of 99% of the nation's population, as opposed to the wealthiest 1%.

[Updated at 5:35 p.m. ET] Several people have been charged with felonies in connection to incidents that have occurred at recent Occupy Denver protests, Denver District Attorney Mitch Morrissey told CNN.

In New York on Thursday, 177 people were arrested during Occupy protests, and five police officers were injured when a liquid was thrown on their faces during confrontations with protesters, police Commissioner Ray Kelly said.

In Portland, Oregon, 25 people were arrested Thursday morning at the east end of the Steel Bridge, where Occupy Portland protesters were gathered, police Lt. Robert King said. All 25 were cited with disorderly conduct.

Five police officers were injured when a liquid was thrown on their faces during confrontations with protesters, Kelly said. The officers experienced a burning on their faces, but were able to wash off the unknown substance at a nearby hospital.

Thursday was the occupy movement's national "mass day of action", marking two months since the movement began in New York. Hundreds of protesters participated in New York on Thursday - their first major show of strength since police evicted demonstrators from Zuccotti Park, where a court has said they may demonstrate but no longer camp out.

New York Mayor Michael Bloomberg said "some protesters today deliberately pursued violence," but added that most were peaceful and have "caused minimal disruptions to our city."

Protesters in New York demonstrated Thursday morning at their former home base, while others marched toward the New York Stock Exchange. Other planned events in New York included "occupy the subways," a plan to gather at 16 hubs at 3 p.m.; and "take the square" at 5 p.m., a reference to Foley Square, across from City Hall. Organizers also plan a march across the Brooklyn Bridge after the gathering at Foley Square.

Clashes between protesters and police happened Thursday at Zuccotti Park - where demonstrators were trying to lift barricades - and on a street in Lower Manhattan.

Explain it to me: Occupy movement

[Updated at 3 p.m. ET] About 175 Occupy Wall Street protesters have been arrested in New York on Thursday, a day that demonstrators have called a national "mass day of action", New York police said.

Demonstrations in New York and other U.S. cities, such as Los Angeles, Dallas and Portland, Oregon, were marking two months since the movement began in New York.

[Updated at 2:40 p.m. ET] Demonstrators and police clashed on a street in Lower Manhattan on Thursday afternoon, according to CNN producer Brian Vitagliano, who was at the scene. Four ambulances and a separate emergency response vehicle responded to the incident.

[Updated at 1:54 p.m. ET] Occupy Wall Street demonstrators and police have scuffled again Thursday in New York's Zuccotti Park, where waves of protesters faced off against columns of police in and around the Lower Manhattan park.

Thursday afternoon's scuffling - following a morning confrontation at the park - came as police attempted to put up metal barricades.

Protesters had lifted metal barricades in the morning, defying authorities and blocking traffic