With a crushing right hand, Juan Manuel Marquez knocked out Manny Pacquiao in the sixth round of a non-title bout in Las Vegas late Saturday, scoring a definitive victory after three previous bouts that ended in close judgments.

The fight came to an end 2:59 into the sixth round, after Marquez landed a right hand to Pacquiao's face, knocking him cold late Saturday at the MGM Grand Garden Arena.

Pacquiao went down face-first and lay motionless for a while, possibly unconscious, before eventually sitting up. It was called a technical knockout and Marquez declared the winner.

The fight was originally scheduled for 12 rounds. Both fighters scored knock-downs earlier in the fight with Marquez putting Pacquiao on his back and Pacquiao tipping Marquez enough off of his feet to cause one of his gloves to touch the mat.

Even the leader of the free world had time Tuesday to comment about the National Football League after Monday night‚Äôs controversial Seahawks-Packers game.

Replacement referees, standing in for regular officials who are locked in a labor dispute with the NFL, controversially ruled that a Seahawks receiver caught a game-winning touchdown pass as time expired. The referees also missed what the NFL says was a penalty against that same receiver - a penalty that, had it been called, would have rendered the catch controversy moot and given the win to the Packers.

Airwaves and social media were buzzing with reaction Monday and Tuesday from NFL players, fans, and yes, President Barack Obama, who says he wants to see the regular referees get back to work.

Discussion of the call virtually took over Twitter in the United States, with the game generating more than 1 million tweets, the social media company said Tuesday. Already disappointed in missed and botched calls since replacements began working in the preseason, many fans and players called for the NFL to quickly settle the labor dispute.

END_OF_DOCUMENT_TOKEN_TO_BE_REPLACED 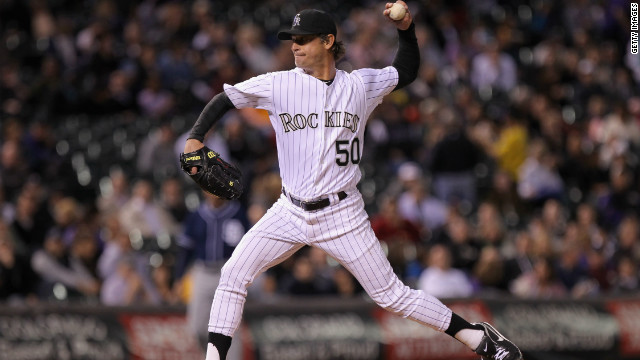 Colorado Rockies pitcher Jamie Moyer leads his team to a 5-3 win against the San Diego Padres on Tuesday night in Denver.
April 18th, 2012
09:27 AM ET

Baseball‚Äôs ageless wonder has become one for the ages.

The Colorado Rockies‚Äô Jamie Moyer - at 49 years and 150 days of age - on Tuesday night became the oldest pitcher in Major League Baseball history to win a game, surrendering two unearned runs in seven innings to guide his new team past the San Diego Padres 5-3 in Denver.

He also tied Hall of Fame pitcher Jim Palmer for 34th on the all-time wins list at 268.

The previous oldest pitcher to win a game in the majors was the Brooklyn Dodgers‚Äô Jack Quinn, who was 49 years and 70 days old when he beat the St. Louis Cardinals in 1932.

Moyer said it was a special night for him, but he said that during the game he was more concerned about having the Rockies finish their nine-game home stand with a winning record than history, according to MLB.com.

"For me to put that in front of the game really would be unfair to my teammates, unfair to myself," Moyer said, according to MLB.com. "It would tell me also that my focus and my attention were in the wrong place.‚Äù

Baseball‚Äôs attention is now focused on the man who easily could have given up the game two years ago, when - already the oldest active player - he injured his elbow.

END_OF_DOCUMENT_TOKEN_TO_BE_REPLACED

A 20-year-old gas station worker was shot and killed after an argument about a face mask. The suspect later gave hi‚Ätwitter.com/i/web/status/1‚Ä¶2y
cnni

6:46 am ET September 22, 2021 RETWEET
A violin-shaped church, an "upside down" house and a hotel modeled on a Russian doll are among the entries in an an‚Ätwitter.com/i/web/status/1‚Ä¶Zl
cnni

6:20 am ET September 22, 2021 RETWEET
China's Evergrande Group will pay interest due Thursday on one of its bonds, but it's keeping rattled investors gue‚Ätwitter.com/i/web/status/1‚Ä¶4Y
cnni