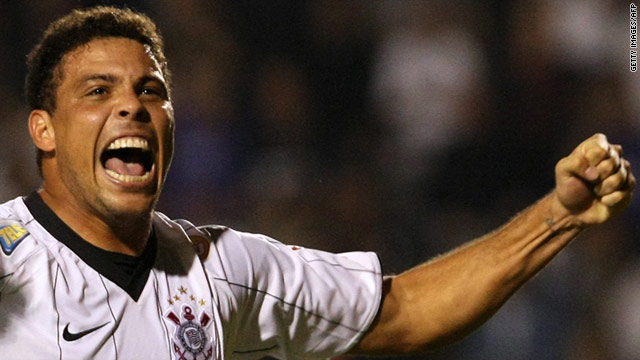 The Brazilian soccer legend, known simply as Ronaldo, is expected to announce his retirement from the sport Monday, according to media reports.

"I wanted to continue, but I can't," the Corinthians player said in Sunday's Estado de São Paulo newspaper. "I think of a play, but I can't execute as I'd like. It's time. But it was so damn beautiful."

At age 34,  the three-time FIFA player of the year and two-time World Cup champion may be seen as an old man in today's sport, but in his day he was all kinds of awesome.

The CBS Los Angeles reporter and two-time Emmy nominee was treated by paramedics late Sunday after an on-air incident, shown on Youtube, where she was reporting on the Grammys but stumbled badly over her lines. She attempted to repeat them but her words became even more incomprehensible.

While the station has yet to release a statement on Branson’s condition, news reports have speculated that Branson may have suffered a stroke live on air.

A CBS colleague, Edward Lawrence, tweeted that the station is “looking into” the incident.

The Lordsburg, New Mexico, couple, both centenarians, mark their 82nd wedding anniversary on Monday, according to the Silver City Sun-News newspaper in New Mexico.

The couple, originally from Arizona, got married on Valentines Day 1929, the newspaper reported. Marshall Kuykendall, 103, and Winnie Kuykendall, 102,  were recently named the longest-wed couple in the United States by Worldwide Marriage Encounter, a faith-based marriage enrichment program.

The couple's only child, Marilyn Miller, told the Sun-News the secret to her parents' union was that they took their vows seriously.  "My dad said they signed a certificate of marriage and made a commitment 'till death do us part,' and they believe in keeping their commitment," Miller was quoted as saying. 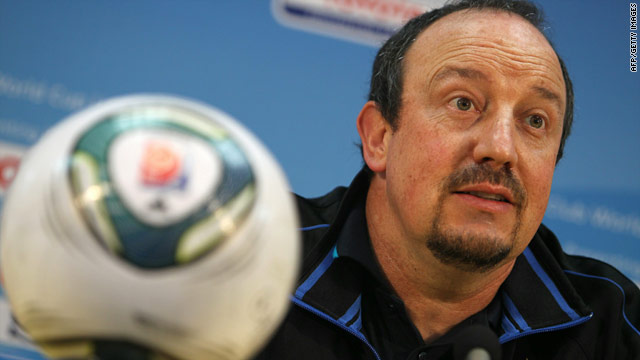 The volatile coach of the Inter Milan soccer team was fired Thursday after demanding the team's owner voice support for him.

Benitez had previously criticized the team's board for its unwillingness to spend money to acquire better players.

Benitez, a 50-year-old Spaniard, had been the team's coach for just six months.

"F.C. Internazionale would like to thank Rafael Benitez for his work in charge of the team, which he guided to success in the Italian League Super Cup and in the FIFA Club World Cup," a statement from the team said.

The Detroit pastor ministered to the poor and homeless out of a run-down church with a huge hole in the roof.

Mitch Albom, a Detroit Free Press columnist and author of "Tuesdays With Morrie," featured Covington in his best-selling 2009 book, "Have a Little Faith."

Covington became a Christian after giving up a life of drug-dealing and violence in New York. He created I Am My Brother's Keeper Ministries in the dilapidated Pilgrim Church in a poor neighborhood in Detroit, where he became the subject of a column by Albom in 2008.

Readers' response to Albom's column resulted in a new book and charitable foundation for Albom, a new roof for the church, and a new level of celebrity for Covington.

Covington and Albom appeared Monday on NBC's "Today" show in New York, Covington's hometown. Covington stayed an extra day to visit with family. He died in his sleep Tuesday night. He was 53.

In an emotional obituary/column Thursday, Albom referred to the night Covington's life changed:

"You were saved that night, saved from the drug dealers out for revenge, and saved from the spiral of an empty, wasted life. Your soul began its comeback. You got clean. Stayed clean. And you kept your promise. You gave the Lord not only your devotion, but your days."

Covington is survived by his wife, Annette, and four children. His funeral will be Tuesday morning at Pilgrim Church.

The 12-year-old from Toronto recently decided to quit her coed hockey team, the Ice Dogs - not because she was the only girl, but because the father of one of her teammates called for severe restrictions on her ice time.

The father, a lawyer, drafted an agenda that identified Kayla's skill level and abilities as a liability to the team.

"It is now 14 games into the season and I have noticed that Kayla's play has not improved," the agenda reads, according to the Toronto Star.

"If Kayla is NOT amenable to the above options, the coach should find Kayla a new team to play on — commensurate to her skill level — for the balance of the season," the agenda reads, according to the Star.

The coach, for his part, said he wanted Kayla to stay on the team. But to spare herself the humiliation and to quiet the controversy, Kayla has switched to playing with the all-girl North York Storm.

"I felt that if I went back all the parents would have been watching every move I made and always staring at me," she told the Star. "To play hockey you shouldn't have to go through what I went through. I was just looking to have friendship and play the game I love."

The artist's exhibit at the Pierogi gallery in Brooklyn, New York, is drawing attention for one particular work: a collection of tracings representing Osama bin Laden.

Esber gave each of 100 friends and relatives a photocopy of a drawing he made of bin Laden, a piece of tracing paper, a pencil, and red and black ink. Each person was asked to trace the drawing and color it to taste.

The result is what The New York Times calls "a dizzying, slightly hallucinatory, one-rogue rogue's gallery."

The result, titled "You, Me and Everyone Else," may say more about the artists than it says about bin Laden.