Three people were killed and one injured in western France after a man opened fire during a business meeting, natio‚Ätwitter.com/i/web/status/1‚Ä¶7y

SpaceX begins fueling its rocket for the historic launch to the International Space Station. Liftoff is expected at‚Ätwitter.com/i/web/status/1‚Ä¶kZ

Disney World plans a phased reopening on July 11 for its Magic Kingdom parks, and on July 15 for EPCOT and Hollywoo‚Ätwitter.com/i/web/status/1‚Ä¶md 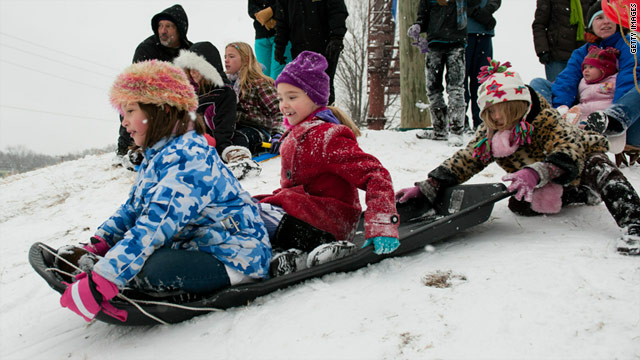 Kids got to play in the snow this week in Charlotte, North Carolina, but it's back to school on Monday, holiday or no holiday.
January 14th, 2011
04:58 PM ET

Some school districts in the South are making up for¬Ý days missed because of this week's snow and ice by requiring students to attend class on Monday's Martin Luther King Jr. holiday, a decision that does not sit well with some parents and community leaders.

The issue is especially sensitive in King's home state of Georgia, where administrators in two rural districts¬Ý - Fannin and Gilmer counties - have canceled the school holiday.

"We have eight days that we've missed, and we're just in the 14th day of January," Fannin Superintendent Mark Henson said. "Here in the North Georgia mountains, history proves we have a lot of snow in January and February and sometimes into early March."

Both districts are considering canceling Presidents Day (February 21) and part or all of spring break as well, the administrators said.

END_OF_DOCUMENT_TOKEN_TO_BE_REPLACED

Protests erupted across Minneapolis after the death of George Floyd, an African American man who was pinned down by‚Ätwitter.com/i/web/status/1‚Ä¶nQ
cnni

5:44 pm ET May 27, 2020 RETWEET
The graves of veterans at a cemetery in Pennsylvania were desecrated over Memorial Day weekend in the US, police sa‚Ätwitter.com/i/web/status/1‚Ä¶x4
cnni

5:27 pm ET May 27, 2020 RETWEET
US President Trump remains intent on holding an Independence Day celebration in Washington, DC, this year. But the‚Ätwitter.com/i/web/status/1‚Ä¶7j
cnni

4:54 pm ET May 27, 2020 RETWEET
There are additional launch windows this Saturday and Sunday, a NASA spokesperson said. The next attempt will be on‚Ätwitter.com/i/web/status/1‚Ä¶A1
cnni

4:46 pm ET May 27, 2020 RETWEET
SpaceX and NASA will have to wait at least a few more days for their historic spaceflight. Bad weather has delayed‚Ätwitter.com/i/web/status/1‚Ä¶jF
cnni