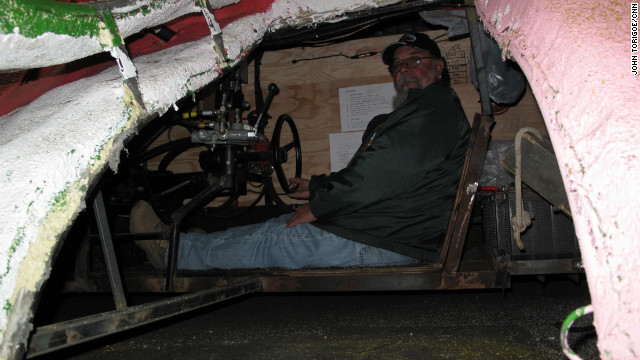 Adolpho Garcia is famous - you just don‚Äôt know it yet. During a 10-year span lasting until 2002, he drove floats in the Rose Parade.

‚ÄúAll they see is a float going down and that‚Äôs all they see,‚Äù the 63-year-old says of parade-goers.

Historically, drivers are hidden inside the float. ‚ÄúWe‚Äôre just the unsung heroes,‚Äù he says.

For the past 23 years, he‚Äôs been a volunteer for the Phoenix Decorating Co., which builds floats. On Monday at the Rose Parade in Pasadena the company will showcase 44 floats - half of all those featured in the parade. Garcia provides security for the float builder now, but driving is in his blood.

A Loyola Marymount float ready for the parade.

‚ÄúThe process of driving is: The driver sits in the back, basically blind. You have an observer in front and he‚Äôs basically telling you what to do.¬Ý‚ÄòLeft ‚Ä¶ right ‚Ä¶ a little faster ‚Ä¶ slow down.‚Äô‚ÄùGarcia says. ‚ÄúWe don‚Äôt see anything, so we‚Äôre relying on our observer.‚Äù

The engines are usually V-8s. Equipped with power steering, they possess the longest drive trains in the world.

The Rose Parade, officially the Tournament of Roses Parade, is an annual New Year‚Äôs Day rolling party that features a potpourri of colorful floats, marching bands and thousands of adoring parade-goers. The parade is in its 123rd year. The Rose Bowl, the annual college football game is a little younger, being added in 1902.

This year millions will watch the parade then tune into the game, featuring the Wisconsin Badgers against the Oregon Ducks.

What they won't see are the ins and outs of a float.

‚ÄúSome of them (floats) are 60-70 feet long,‚Äù Garcia says. ‚ÄúWhen you‚Äôre 40 feet from the front, the observer‚Äôs telling you to do something, and by the time you do it, you make the turn you're still in the back. It‚Äôs like driving a semi (truck) blind,‚Äù he says.

Maximum speed is a mere 4 miles per hour. But when your‚Äôe so low to the ground it seems like you‚Äôre really moving, Garcia says. Around the driver is a steering wheel, a cable for the throttle and a foot brake to stop.

‚ÄúThe thing about a driver is, if you hit somebody it‚Äôs not your fault.¬ÝIt‚Äôs the observer's fault, because you‚Äôre doing what he tells you,‚Äù he says.

Opposite sides of the stadium: Family football rivalries

Once Garcia crawls into the float, he‚Äôs there four to six hours.¬Ý‚ÄúI don‚Äôt drink or eat six hours before, he says. ‚ÄúThat way I don‚Äôt have the feeling.‚Äù

With no windows and the engine block next to you, it gets hot inside - up to 150 degrees, Garcia says. ‚ÄúYou start out in sweats‚Äù he says, ‚Äúand by the time you get to the end you‚Äôre in shorts because it gets warm in there.‚Äù

If there are pyrotechnics, the floats may have a separate operator. Sometimes they pose as riders waving to the crowd with one hand and pressing a button to shoot fireworks in the other. In other cases, the driver uses a lever to raise or lower the moving parts on a float.

‚ÄúWhen you tell me I‚Äôm going to drive 5 1/2 miles down a stretch of very important road in Pasadena I‚Äôm going to tell you that you‚Äôre crazy,‚Äù Dancel says. ‚ÄúTo be one of the chosen few (drivers) is an honor.‚Äù

‚ÄúI‚Äôve known drivers that have gotten it all over them, says Garcia. ‚ÄúThey run over it and it comes right inside the float.‚Äù

The only recognition Garcia gets is by sticking his hand out under the float. Looking through a crack in the door, he can see the fans pointing at his waving hand. He said he once heard from another volunteer that "some lady came running to him and said that they were dragging a body underneath the float - and it was me waving to people.‚Äù

‚ÄúPeople wonder how it happens that no one sees you in there and all of a sudden, they see you crawl out and they go ‚ÄòWow! Must be neat!‚Äô¬Ý ‚ÄòHow do you get to do that?‚Äô ‚ÄòWhere do you sign up?‚Äô and I tell them well you gotta‚Äô get a license to drive a float!‚Äù¬Ýhe says.

‚ÄúIf you do it once you‚Äôll want to do it again, guarantee it!‚Äù

‚ÄúAs long as you‚Äôre not scared of confined areas." 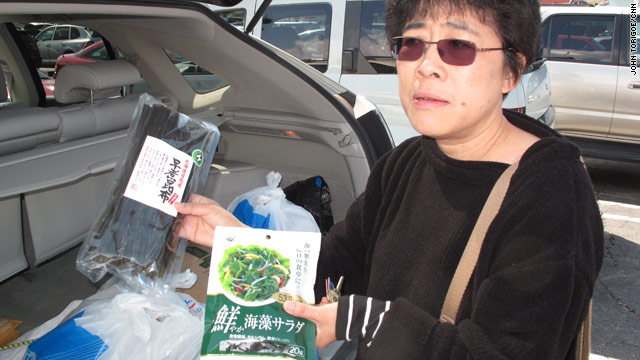 Mei Lee is worried about the quality of seaweed that comes from waters off Japan.
March 24th, 2011
07:02 PM ET

Mei Lee, 26, is stocking up on nori, the Japanese name for dried seaweed, and udon noodles. ¬ÝShe rummages through shopping bags and holds up several packs of nori.

"This is from the ocean, ¬Ýit‚Äôs not very far from the nuclear power plant, so I‚Äôm worried about radiation" she says.

END_OF_DOCUMENT_TOKEN_TO_BE_REPLACED

Tributes have been paid to British television presenter Caroline Flack after her family confirmed her death Saturday cnn.it/37zLXb6
cnni

12:56 pm ET February 16, 2020 RETWEET
The US plan to evacuate 400 Americans from the quarantined cruise ship docked off the coast of Japan has prompted a‚Ätwitter.com/i/web/status/1‚Ä¶lB
cnni