The Libyan government has notified the United States that an employee at the U.S. Consulate in Benghazi, Libya, was killed Tuesday, a State Department official told CNN.

The State Department does not have independent confirmation of the death, the official said. The nationality of the worker was not immediately clear.

"We are working with the Libyans now to secure the compound," Nuland said. "We condemn in strongest terms this attack on our diplomatic mission."

Members of a radical Islamist group had been protesting at the consulate, a freelance journalist working for CNN in Benghazi said.

The president of the Libyan Olympic Committee has been kidnapped, the committee said Monday.

Ahmad Nabil al-Alam was taken in central Tripoli on Sunday, the organization said.

He was followed by two vehicles and then seized by unidentified gunmen around 4 p.m., the committee said.

The identity and motive of the kidnappers were not immediately known.

A militia group has seized control of the international airport in Tripoli, Libya, a security source said Monday.

Two platoons of the Tarhouna militia moved in overnight because of an ongoing dispute with the national government, sparked by the disappearance of a militia leader on the airport road Sunday, the source said.

At least one Shiite pilgrim was killed and 10 others wounded in a bombing south of Baghdad on Monday, officials said.

An Interior Ministry official said a roadside bomb struck pilgrims in Mahmoudiya south of the capital on Monday morning as the pilgrims were on foot heading to the southern city of Karbala.

Hundreds of thousands of Shiites are making their way to Karbala to commemorate the Arbaeen pilgrimage this weekend.

Arbaeen is the pilgrimage marking the end of a 40 day mourning period for the death of Imam Hussain, the grandson of the Prophet Mohammed, a seventh century imam and one of Shiaa Islam's holiest figures.

Since 2003, attacks blamed on Sunni extremists have often targeted the pilgrims - many of whom make a lengthy journey on foot to the Shiite holy city of Karbala.

Over recent days near daily attacks on pilgrims have left scores dead and wounded.

The clashes were over control of a building that previously housed an intelligence center under former Libyan leader Moammar Gadhafi, said Col. Abdul Monem al-Tunsi, spokesman for the ministry.

Al-Tunsi said he was traveling in eastern Libya, but has received reports the situation is "on its way to being resolved." However, he said, there may be injuries in the clashes.

As Libyan leader Moammar Gadhafi urged supporters to take up arms and battle rebel forces Monday, a senior member of Gadhafi's government arrived in Cairo amid rumors that he had defected, Egypt's state-run Al-Ahram newspaper reported.

Nasr al-Mabrouk Abdallah arrived with nine of his family members on a private plane from Djerba, Tunisia, the newspaper reported, citing an unidentified airport official. Djerba is about 150 miles (240 kilometers) west of Tripoli.

Libyan Embassy officials did not greet the plane when it pulled up to Terminal 4, which is the arrival point for private planes, fueling speculation that Abdallah may have abandoned Gadhafi, the newspaper said. Al-Ahram and an official at Cairo International Airport identified Abdallah as Libya's minister of the interior.

But a Libyan government official - whose information has proved reliable in the past but who is not allowed to talk to the news media for attribution - identified Abdallah as an administrative director at the Interior Ministry and a former Libyan minister. 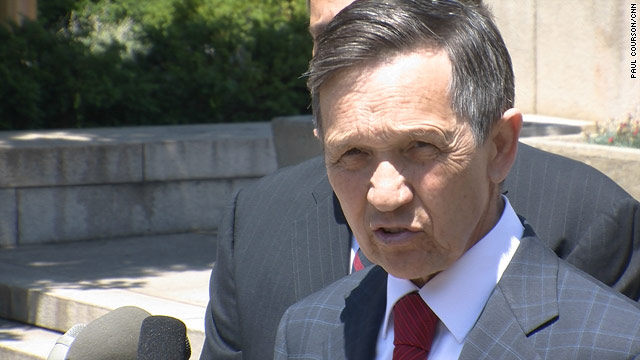 U.S. Rep. Dennis Kucinich, the Ohio Democrat who's long been an outspoken anti-war voice in Congress, is visiting volatile Syria to explore whether there is a resolution to the violence spiraling across that country.

Kucinich is part of a small delegation on a fact-finding mission to Syria and neighboring Lebanon.

He said in a statement on Monday that he pursued the trip because his constituents, a Cleveland-area district that includes many Arab-Americans, asked him to look into "conditions on the ground" and see if there's a solution to a situation that's "spinning out of control."

Prime Minister Nuri al-Maliki's State of Law Coalition and the Iraqi National Alliance, a coalition of powerful Shiite parties backed by Iran, now have a bloc with 159 seats - just four seats away from the majority they'll need to form a cabinet.

END_OF_DOCUMENT_TOKEN_TO_BE_REPLACED

A manual recount got under way Monday of some ballots cast in Iraq's national elections nearly two months ago.

END_OF_DOCUMENT_TOKEN_TO_BE_REPLACED

(CNN) - At least one person was killed and 80 others wounded in a double bombing near the northern city of Mosul on Sunday, according to police.

Minorities in Iraq, especially in the north of the country, including Christians, have been frequently targeted by militant groups.

Although the overall levels of violence across the country have dropped drastically compared to the height of the sectarian war in 2006 and 2007, official figures showed an increase in civilian casualties last month.

At least 274 civilians were killed in April compared to 216 in March and 211 in February, according to Interior Ministry figures.