One of the rockets landed in the courtyard of a house in the city of Sderot, but no casualties were reported, Israeli police spokesman Micky Rosenfeld said. 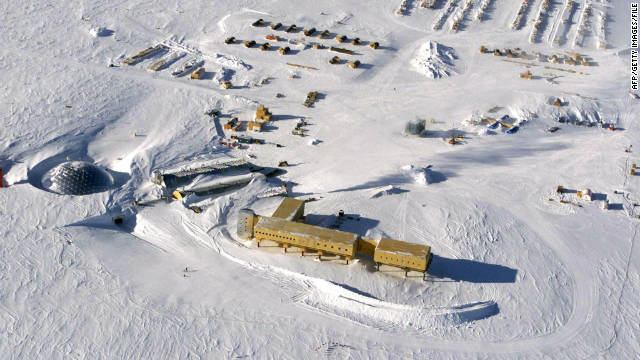 This photo dated October 2002 shows an aerial view of US Amundsen-Scott South Pole Station in Antarctica where Renee-Nicole Douceur has been stranded.
October 17th, 2011
04:46 AM ET

After weeks of waiting, an American researcher who suffered a suspected stroke while working in the South Pole flew out Monday.

Renee-Nicole Douceur, 58, had been stranded at the Amundsen-Scott research station in Antarctica since she fell ill on August 27. She had been unable to leave to receive treatment, due to bad weather and storms that prevent planes from landing during the region's winter period.

The website SaveRenee.org reported Sunday that Douceur will depart from the South Pole on a cargo flight.

The New Hampshire woman will first go to McMurdo Station in Antarctica and then to Christchurch, New Zealand, later this week.

Last week, Douceur told CNN she had been pleading for a rescue evacuation flight since her initial stroke but her request was denied.

Raytheon Polar Services - the company that runs the station for the National Science Foundation - deemed it too dangerous to send an air rescue crew in, she said.

"While I was devastated that I had a stroke, it was like, oh, my God, it just stymied me...and I cried," Douceur said. " I just didn't know what to do and the doctors basically told me, just go back to my room.".

Raytheon Polar Services told CNN that Douceur's station has a well-trained medical staff that can provide all levels of medical for employees.

Men get at least 17.5 years in prison for Florida killings

Four men were sentenced in Florida Thursday for their role in the 2009 killings of a husband and wife who were shot to death when a crew of masked men burst into their home, a court spokeswoman said.

The men were convicted of second-degree murder and home invasion for their roles in the slayings of Â Byrd and Melanie Billings.Â A judge in Escambia County, Florida, sentenced them Thursday, according to Marilyn Taylor, the county's director of court services.

Nine special-needs children the couple had adopted were in the house at the time of the 2009 murders, authorities said.

At least 20 people were killed and more than 30 others wounded in a car bomb blast in Somalia's capital of Mogadishâ€twitter.com/i/web/status/1â€¦Ot
cnni

12:01 am ET March 6, 2021 RETWEET
NASA provides an update on the Perseverance rover's "firsts" and milestones so far, as well as what's next for itsâ€twitter.com/i/web/status/1â€¦Fy
cnni