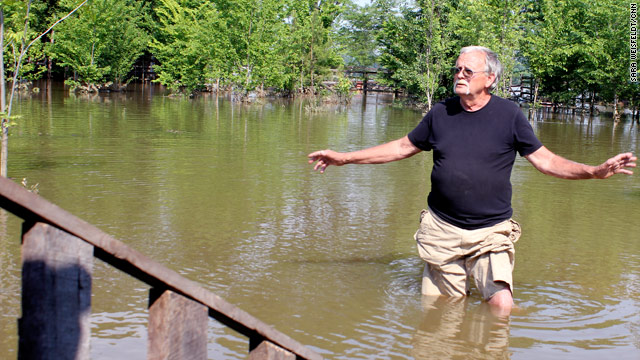 The 61-year old retired construction supervisor lives in Bogota, Tennessee, aÂ small farming community aboutÂ seven miles from the Mississippi River. Hayes isn't budging from the flooding, even as his two-room trailer is more than 5 feet off the ground. "There's the possibility the trailer could shift, could turn. Could flip over," Hayes tells CNN's Patrick Oppmann, standing on the small porch to the trailer. "Then again, I am not worried about that because I will get out."

The half-American, half-Syrian journalist who lives in Damascus has been gaining attention internationally for her blog "A Gay Girl in Damascus." Abdullah says her blogÂ is an "out Syrian lesbian's thoughts on life, the universe and so on."

After repeated threats by the Syrian government, Abdullah has gone underground. "I have no desire to be a martyr, even to my own cause so I will do what I can to stay free," she posted last week.

Â Abdullah is still blogging from her new location. Her most recent post appeared Tuesday morning.

END_OF_DOCUMENT_TOKEN_TO_BE_REPLACED

Reducing daily steps to fewer than 1,500 â€” similar to the activity level of people who are housebound during this ptwitter.com/i/web/status/1â€¦Ikz0
cnni