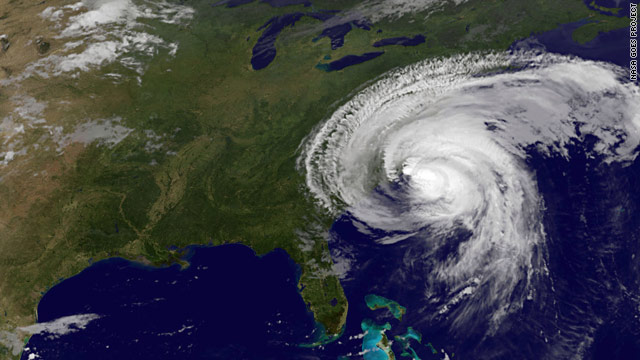 (IN THE OUTER BANKS, NORTH CAROLINA)Â I've been feeling the storm escalate with every passing hour.Â  The rain is nonstop and the gale force winds are now gusting up toÂ  tropical storm strength. This is a fraction of what's to come after dawn.Â  Authorities warn residents on the Outer Banks to heed the mandatory evacuation orders or risk the dangers of the storm alone.Â  Emergency personnel will not venture out into the storm because it's too risky.Â  Roads may be flooded or blocked for days after.Â  Everyone has been advised to be prepared to be on their own for at least 72 hours.

(SEASIDE HEIGHTS, NEW JERSEY)Â Â This is the place where they filmed the MTV reality show â€śJersey Shoreâ€ť. Â I was at the casino pier, which is actually like a boardwalk similar to New York's Coney Island. People were out enjoying the beach, getting tans and surfing.

With temperatures about 85 degrees, Â it was a really nice day to be at the beach here. I heard Governor Chris Christie telling people to get off the beaches, but it didnâ€™t seem to stop the people. I was told by regular beach-goers that the crowds werenâ€™t nearly as big today. It was noticeably not crowded but it wasnâ€™t a ghost town either.

Talking to tourists, some said they came down to enjoy the weekend and that they felt like thir trip was being cut short. One guy said he had just got to his hotel and was told they were going to close so he couldnâ€™t even check in.

(KILL DEVIL HILLS, NORTH CAROLINA)Â  After boarding up their house, a family in Kill Devil Hills left a spray-painted message for the storm on one of the boarded-up windows of their home.Â  "Good Night, Irene," the message said. 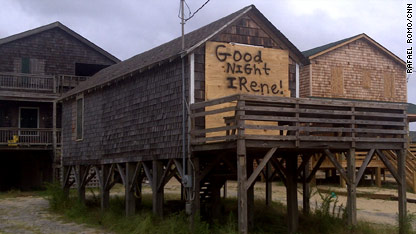 The Nags Head Fire and Rescue Department also had a message for the hurricane:Â  "Go Away, Irene," the message written on a bulletin board outside their building said. 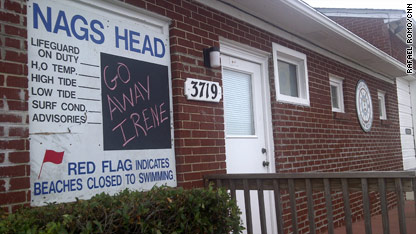 We found a couple going for one last walk on the beach before the arrival of Irene.Â  We also found a family with two young boys flying kites there.

"It is fun," Goulde said.Â  "I'm just messing around right now.Â  It's kind of
heavy out there though."

(KILL DEVIL HILLS, NORTH CAROLINA)Â  We are on the beach.Â  The first outer rain is just beginning to reach us. The wind has slowly intensified, but nowhere near gale-force yet. No one is in the water, and the few people on the beach are being told not to swim. 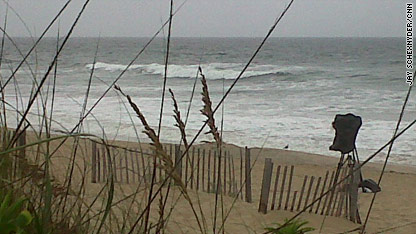 I'm manning a beach camera with CNN's David Mattingly. The camera is visible at the top right, covered with a black trash bag (a preferred protection over conventional rain covers; it's more versatile). As conditions worsen, we will go to a hotel balcony overlook with drier conditions and will continue broadcasting into the night and for the duration.Â  We've stocked our work space with water and food (the least salty or sweet the better).

(STUMPY POINT, NORTH CAROLINA) Evacuating your home is never easy. And it gets a lot harder when youâ€™re by yourself and have three toddlers in tow.

Here, she, Madison, 7, Faith 4, and 10-month-old Waylon would catch a county bus that will take her to a shelter offÂ  North Carolinaâ€™s Outer Banks. She told us that she lives too close to the water. 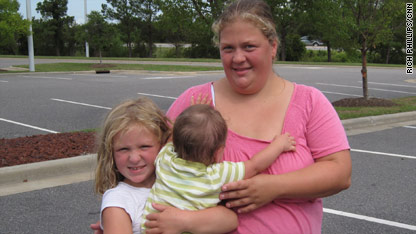 Kimberly Roehrig thinks the water may flood out her home, so sheâ€™s bringing her kids to a shelter.

â€śI donâ€™t want to be there for a flood,â€ť she said with a nervous smile.

â€śIâ€™m a little nervous, but as long as we have shelter, weâ€™ll be ok,â€ť she said.

(NEW YORK CITY, NEW YORK) In a hurricane the higher you go, the stronger the wind gusts are. Construction workers have that in mind as they secure One World Trade Center in New York ahead of Ireneâ€™s arrival.

While the windows being installed on the soon-to-be tallest building in the U.S. are designed to withstand 125 mph winds theyâ€™re only in place up to the 52nd floor. Steel beams taking the place of the Twin Towers have risen to the 80th floor. The remaining upper floors are open to the elements. 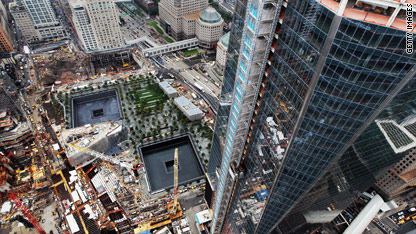 Thatâ€™s a serious concern because anything blown off a building from that height, even something as small as a bolt, can become a deadly projectile in a hurricane.

â€śThey are very big on safety here,â€ť said Kelly Potts, an electrician working on One World Trade Center. â€śIf anything is not tied down they will address it and fix it.â€ť

â€śLoose boards, metal, anything thatâ€™s near the edge of the platformâ€¦ they are going to make sure that itâ€™s away from there and tied down.â€ť

END_OF_DOCUMENT_TOKEN_TO_BE_REPLACED 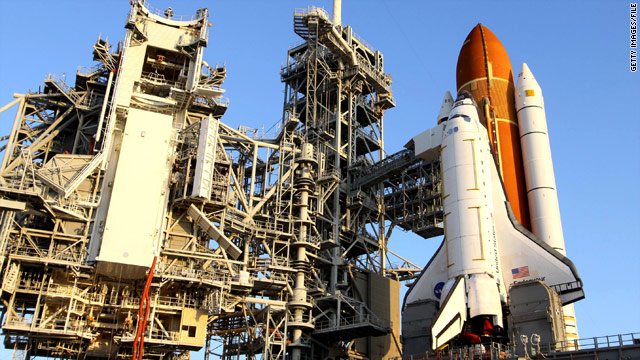 There could be as many as 700,000 people gathered to witness space shuttle Endeavour's final mission in Central Florida on Friday afternoon.

"I'm thinking this is like the world's largest tailgate party," said Rob Varley, the executive director of the Space Coast Office of Tourism.

One of the most high-profile spectators will be U.S. Rep. Gabrielle Giffords, wife of Endeavour commander Mark Kelly. Giffords is recovering from a gunshot to her head after a man attacked her and killed several others at a January political event in Arizona. She departed a Houston, Texas, rehabilitation facility Wednesday on her way to Florida.

President Obama is also expected to attend the launch.

By comparison, February's launch of the shuttle Discovery on its final mission drew about 450,000 spectators.

Anyone still toying with the idea of traveling to the area to see the event should know roadways will be crowded. Come and camp out early, Varley suggested.

Though Friday will mark the last time Endeavor flies, there will be one more shuttle flight scheduled before the program ends this summer. 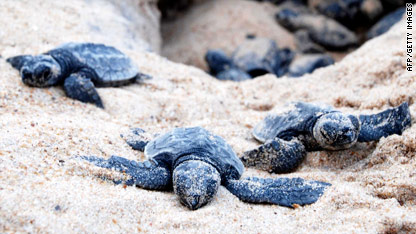 A sea turtle egg relocation project has been started in hopes of keeping hatchlings out of the oil that's spreading through Gulf of Mexico.

The eggs are being moved to a secure facility in CapeÂ  Canaveral, Florida, where the turtles will be released in the Atlantic Ocean once they're hatched. Cabbage said the fear with leaving the eggs on the Gulf Coast is "the turtles wil ride the current into the oil."

TheÂ  eggs will be collected three times a week from now until November.

What games are hot â€” and not â€” this holiday season? Hasbro's CEO breaks down this year's favorites. https://t.co/MyBNFX5Y0e
cnni

7:51 pm ET November 26, 2022 RETWEET
The designers behind the world's skinniest skyscraper have just given fans of ultra-luxury living an early Christmaâ€twitter.com/i/web/status/1â€¦yw
cnni

What games are hot â€” and not â€” this holiday season? Hasbro's CEO breaks down this year's favorites. https://t.co/MyBNFX5Y0e
cnni

7:51 pm ET November 26, 2022 RETWEET
The designers behind the world's skinniest skyscraper have just given fans of ultra-luxury living an early Christmaâ€twitter.com/i/web/status/1â€¦yw
cnni