Nearly 230 GOP lawmakers file a legal brief, calling on the Supreme Court to release its "vise grip on abortion polâ€twitter.com/i/web/status/1â€¦1L

Israel's health care system has been told to make arrangements to begin vaccinating people over 60 with a third dosâ€twitter.com/i/web/status/1â€¦Cu

American Sunisa Lee takes gold in all-around gymnastics at the Tokyo Olympics with Simone Biles cheering from the sâ€twitter.com/i/web/status/1â€¦1J

The US economy expanded at a slower rate than expected in the second quarter but still at its fastest pace since laâ€twitter.com/i/web/status/1â€¦ff 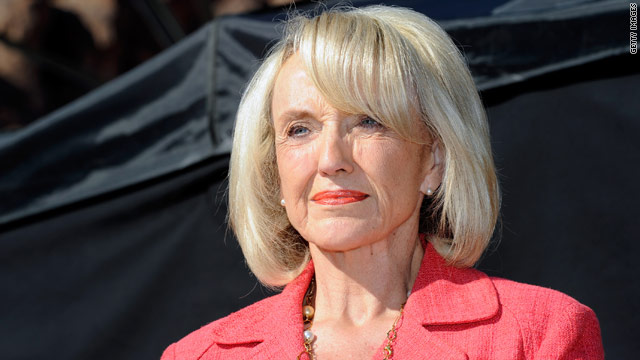 ď»żď»żDepartment of Homeland Security spokesman Matt Chandler called Arizona's court claim a "meritless" one that "does nothing to secure the border."

ď»ż"Smart strategies, dedicated law enforcement personnel and strategic partnerships with state, local and tribal governments and agencies do," Chandler said. "Not only do actions like this ignore all of the statistical evidence, they also belittle the significant progress that our men and women in uniform have made to protect this border and the people who live alongside it."

Fighting to hold back tears, Brewer thanked supporters, who she noted had offered prayers amidst personal attacks she said she has endured. But sheÂ bounced back, saying, "If you know one thing about Jan Brewer, you know that Iâ€™m not a quitter. Arizona is doing its duty."

"We need help." The Nevada governor pleas for resources alongside the governor of California as wildfires ravage thâ€twitter.com/i/web/status/1â€¦A0
CNNweather

11:01 am ET July 29, 2021 RETWEET
Billionaire Sun Dawu, a vocal critic of the Chinese government, was sentenced to 18 years in prison on Wednesday foâ€twitter.com/i/web/status/1â€¦dY
cnni