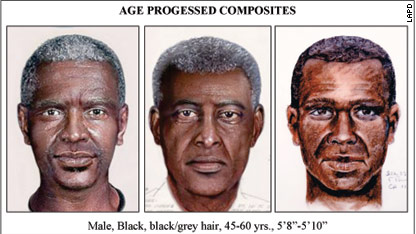 New composite sketches have gone up on billboards across Los Angeles as police intensify their hunt for the â€śGrim Sleeper,â€ť a serial killer suspected of murdering 11 women since 1985.

â€śItâ€™s just another creative effort to try to shake loose some information because we believe heâ€™s still around and in the southern L.A. area,â€ť said LAPD Det. Dennis Kilcoyne, who has been tracking the case for years.

Kilcoyne said police have been flooded with calls since the new billboards and sketches went up, but they've had no concrete leads. Kilcoyne said regular sightings are expected when new sketches go up, and he hopes one of them could lead them to their man.

For two decades the â€śGrim Sleeperâ€ť â€“ nicknamed for the length of time between his attacks â€“ has been targeting black women, some who worked as prostitutes, police say.