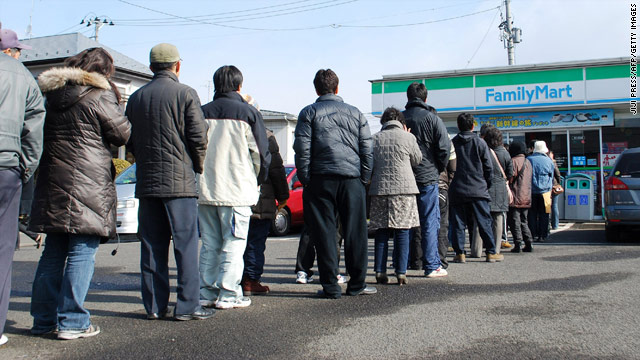 The layer of human turmoil - looting and scuffles for food or services - that often comes in the wake of disaster seems noticeably absent in Japan.

ŌĆ£Looting simply does not take place in Japan. IŌĆÖm not even sure if thereŌĆÖs a word for it that is as clear in its implications as when we hear ŌĆślooting,ŌĆÖ" said Gregory Pflugfelder, director of the Donald Keene Center of Japanese Culture at Columbia University.

Japanese have ŌĆ£a sense of being first and foremost responsible to the community,ŌĆØ he said.

To Merry White, an anthropology professor at Boston University who studies Japanese culture , the real question is why looting and disorder exist in American society. She attributes it largely to social alienation and class gaps.

"There IS some alienation and indeed some class gaps in Japan too but┬Āviolence, and taking what belongs to others, are simply not culturally┬Āapproved or supported," White said in an e-mail.

END_OF_DOCUMENT_TOKEN_TO_BE_REPLACED

Airlines hoping for exemptions at some airports to the tarmac delay rule going into effect next week are out of luck.

The Department of Transportation denied requests Thursday from JetBlue, Delta, Continental, American and US Airways for exceptions to the rule, which were prompted by runway construction at New York's John F. Kennedy International Airport, one of the nation's most congested airports.