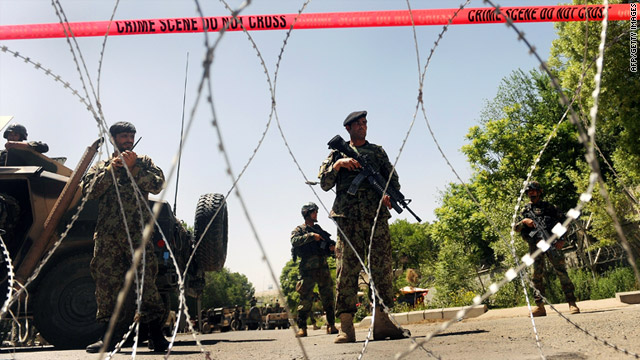 Members of the Afghan military on Saturday stand guard on the road that leads to the military hospital that was attacked.
May 21st, 2011
06:32 AM ET

Six people were killed and 26 injured in a suicide bombing at a military hospital in Kabul, Afghanistan,┬Āon Saturday, authorities said.

A Taliban spokesman claimed responsibility, and said 51 people had died.

At least 26 people were injured, said Zahir┬ĀAzimi, a spokesman for the ministry of defense.

Two Taliban members carried out suicide attacks on the Charsd┬ĀBester┬Āmilitary hospital, Zabiullah┬ĀMojahed, a spokesman for the militant group, told CNN

"One of them detonated inside the eating place and the second one was shot to death and now the operation is over," he said. "As a result, 51 people (have) been killed, including foreigners."

Afghanistan has announced the freeing of prisoners and the United Nations' intentions to remove some Taliban members from a terror blacklist, efforts that come on the heels of a recent nationwide peace conference, government officials said on Tuesday.

More than 25 prisoners have been freed in a move to get militants to lay down their arms, a government official told CNN Tuesday.

END_OF_DOCUMENT_TOKEN_TO_BE_REPLACED

Attacks kill or wound 13 in Afghanistan