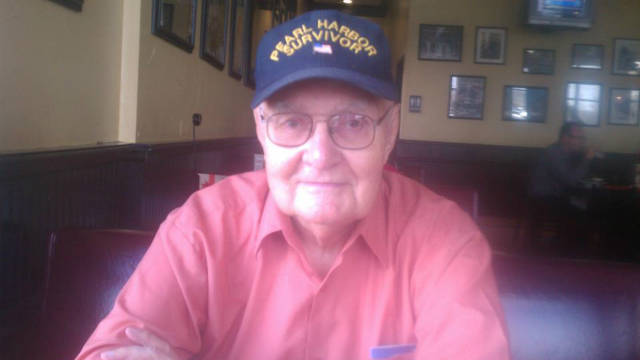 "It’s important for people to know that there was such a thing as an attack in 1941 on December the 7th," Kerr said. "It’s part of history. It’s one of the biggest events in our history. 9/11 may equal it, but it can't be forgotten."

END_OF_DOCUMENT_TOKEN_TO_BE_REPLACED 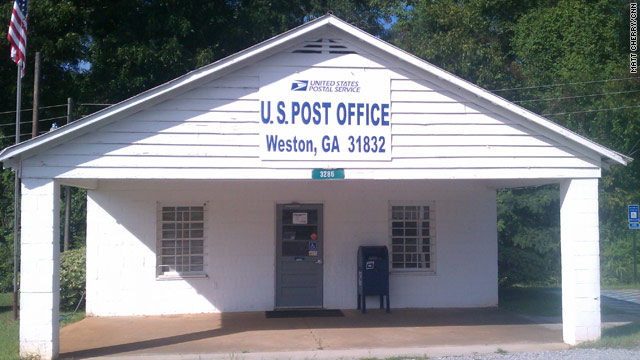 The post office in Weston, Georgia, is one of many that the U.S. Postal Service is considering closing to cut costs.
August 12th, 2011
07:43 PM ET

The U.S. Postal Service has published a list of more than 3,000 post offices it will consider closing to cut costs. Many of these closures would take place in small towns like Weston and Parrott, Georgia - neighboring communities about three hours southwest of Atlanta.

Residents of Parrott, a town of 158 people, have started a petition to save their post office. They cite a variety of reasons for wanting to keep it, including security, convenience and the identity the institution provides.

People want to know how they'll get their mail, stamps, packages, medicine and social security checks.

The postal service stands to lose $9 billion this year. Factors like a large drop in mail volume in recent years and the national economic downturn require tough steps to make the agency solvent, it says. However, it plans to listen to the concerns of people affected by closures at a series of public meetings set to begin in September. 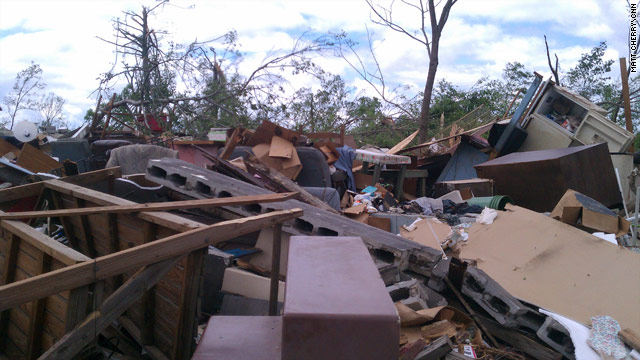 Dozens of homes in Ringgold, Georgia, were ravaged by storms and tornadoes that barreled through the South this week.
April 28th, 2011
06:49 PM ET

A tornado tore apart Reba Self's home in a matter of seconds. But, for a while, she thought she had lost much more than just a place to live.

It's an experience Self will never forget, and one that previously only existed in her nightmares.

"My dad kind of had me terrified of storms when I was a little girl, and I would get kind of nervous. But, I just thought go to the lower part of the house, it'll pass. I'm lucky to be here and so is my mom. I don't know how we lived through it, but we did."

She eventually found her mother, but her home in Ringgold, Georgia, was one of many in this small community on the Tennessee border ravaged by severe storms and tornadoes that barreled through the South this week.

Self's home was knocked off its foundation and a tree fell through the roof.

The storm seemed to pick and choose its victims. Some neighbors' homes were virtually unscathed. However, others have vanished into a pile of rubble, a mailbox the only other indication that just hours before, a house had stood there.

"You're either kin to somebody, or somebody knows you. It's a close-knit place," resident Jeff Conaway says.

Some of the worst damage from Wednesday's tornadoes was in Tuscaloosa, Alabama.
April 28th, 2011
01:57 AM ET

[Updated at 9:57 p.m. ET] More than 280 people have been killed by the wave of violent weather that has swept across the South the past two days.

Survivors told of entire neighborhoods reduced to rubble and the terror of tornadoes ripping through their homes and businesses.

Here are the voices of some survivors:

Shortly before a massive tornado tore through her Tuscaloosa, Alabama, neighborhood on Wednesday, Lucy Arnold Sykes decided the weather was ominous enough to shelter her 3-year-old and 6-year-old children in a bathtub.

"I ran in with the kids and kind of joked (to my husband), 'Don't make fun of me for putting the kids in the bathtub, but I think this is serious,' " she told CNN's "The Situation Room" on Thursday. "He went out for one last look, and … he came back in with kind of a strange look on his face, and he said, 'It's right outside the door.' "

Have the tornadoes affected you? Share your stories, photos and video

The edge of the tornado passed across the street, but the wind tore apart a corner of the house, sent a tree crashing onto the roof, broke nearly all the windows and flipped her vehicle from the curb onto her front lawn.

The family is OK and stayed with friends on Wednesday night.

"(The kids) want to know when they’re going to go back home. I don't think that will be anytime soon. We're going to be looking for a new house," she said.

END_OF_DOCUMENT_TOKEN_TO_BE_REPLACED 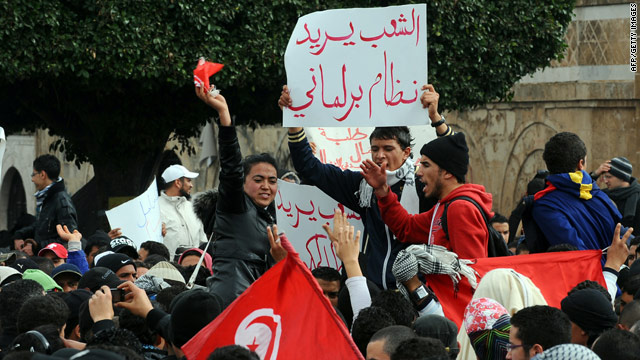 There has been a common thread in the recent political upheaval in Tunisia and Egypt: Social media has played a role in both influencing the protests and reporting on them.

"Social media is key to the revolution taking place in North Africa, and this may actually be the first time a government leader has lost power because of social media," said Darrell West, the vice president for governance studies at the Brookings Institution, referring to the ousting of former Tunisian president Zine El Abidine Ben Ali.

However, social media isn't strictly a tool for those with a gripe with their government. Governments themselves have shown a willingness to use websites like Twitter for their own means in the wake of unrest, according to James Carafano, a senior research fellow at the Heritage Foundation.

END_OF_DOCUMENT_TOKEN_TO_BE_REPLACED

The Roman Catholic Diocese of Burlington, Vermont, announced Thursday it has settled 26 clergy abuse lawsuits dating back to the 1970s for $17.6 million.
END_OF_DOCUMENT_TOKEN_TO_BE_REPLACED