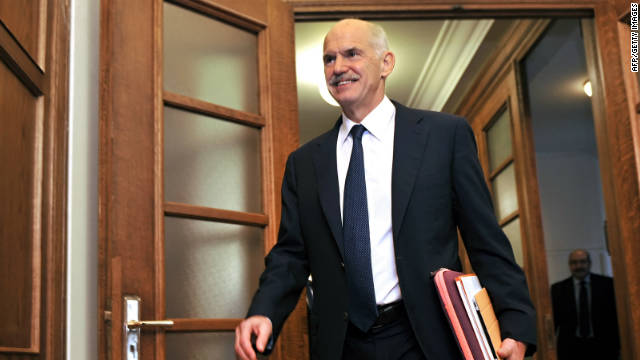 Greek opposition leader calls for Papandreou to step down

[Updated at 2:46 p.m. ET] The leader of the main Greek opposition party has called for Prime Minister George Papandreou to step down and for snap elections to be held within six weeks.

The move by Antonis Samaras comes amid uncertainty over whether Papandreou was canceling a referendum over a European bailout package. Earlier Thursday, Papandreou told his Cabinet there was not need for a referendum, given opposition support for the tough austerity measures that accompany the bailout.

Samaras' move undermines the idea of consensus on the austerity measures attached to the bailout deal.

European Union leaders on October 27 got Greek bondholders to scrap about half of Greece's debt as part of a three-pronged plan aimed at shoring up Greece's financial future, returning stability to Europe's banks and expanding the EFSF bailout fund's resources to more than €1 trillion.

But less than a week later, Papandreou shocked the world by calling for a national referendum on international aid for his country - despite already agreeing in principle to implement reforms in order to meet Greek bondholders' terms - which, if rejected, could lead to a Greek default and the country's exit from the euro.

[Initial post, 11:45 a.m. ET] Greek Prime Minister George Papandreou is backing off plans to hold a controversial referendum on an international bailout for his country, he told his Cabinet Thursday, saying there was no need for it given opposition support for the tough austerity measures that accompany it.

Still, it was not immediately clear if that meant he was canceling the referendum.