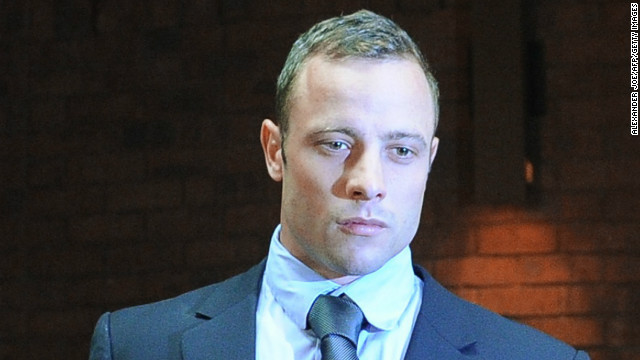 A South African official familiar with the case offered new details Monday about the shooting death of model Reeva Steenkamp at the Pretoria home of her boyfriend, Olympic hero Oscar Pistorius.

Pistorius has been charged with murder in the killing.

The details are:
- Steenkamp was shot four times through the bathroom door
- Pistorius carried her downstairs while she was alive
- There are several indications that Steenkamp was at the house to spend the night. She had an overnight bag and her iPad

Oscar Pistorius charged with murder in death of model girlfriend

[Updated 10:30 a.m. ET] Olympic runner Oscar Pistorius has been charged with murder in the death of his girlfriend, model Reeva Steenkamp, at his South Africa home early Thursday.

Pistorius, nicknamed the "Blade Runner," made history when he became the first Paralympian to compete in the able-bodied Olympics last year. Check our full story for the latest.

The victim was model Reeva Steenkamp, according to Capacity Relations, the agency that represents her. Steenkamp was Pistorius' girlfriend.

Police said they have arrested a 26-year-old man - the same age as Pistorius - in connection with the shooting, and that he will appear in Pretoria magistrate court sometime Thursday.

Pistorius, nicknamed the "Blade Runner," made history when he became the first Paralympian to compete in the able-bodied Olympics last year.

Police said Pistorius was cooperating with them.

Four minors accused in a videotaped gang rape of a mentally disabled teenager in South Africa were released Thursday on $67 bail, their lawyer told CNN.

Four adults are also suspects in the case. Their bail hearing will be June 20, a court spokesman said last week.

The images of the assault of the 17-year-old girl, believed to be mentally ill, swept across the Internet and touched a nerve in South Africa.

The shocking footage shows the girl pleading for her attackers to stop, and it has some activists saying it is an example of the country's problem with rape.

The girl went missing on March 21. Police suspect she was kidnapped and turned into a sex slave.

The cell phone video of her gang rape surfaced and went viral among schoolchildren in Soweto, a vast township near Johannesburg.

The Daily Sun, a local tabloid, alerted police about the attack after a concerned mother whose daughter was watching the video handed it over to the newspaper.

Police embarked on a search for the girl and the people in the video.

Eight suspects have been arrested and charged with kidnapping and raping the teen. Seven of them were seen on the video; the other was a 37-year-old man found with the girl.

A British man was severely injured in an attack by a great white shark while swimming this week near Cape Town, South Africa.

Michael Cohen, 43, lost his right leg and suffered injuries to his left foot in Wednesday's incident near Fish Hoek Beach. He was in critical condition and under heavy sedation in an intensive care unit on Thursday.

According to city officials, the beach was closed when Cohen decided to go for a swim. Warning flags had been raised to alert beach goers that it was not safe to enter the water due to shark sightings.Â  Officials said it was not clear why Cohen ignored the warnings.

END_OF_DOCUMENT_TOKEN_TO_BE_REPLACED

8:15 am ET January 24, 2022 RETWEET
This week, CNN Talk is broadcasting from Dubai's World Expo, where 180 countries are exploring solutions to globalâ€twitter.com/i/web/status/1â€¦mY
cnni

7:59 am ET January 24, 2022 RETWEET
A depleted Tunisia side stunned three-time champion Nigeria to reach the quarterfinals of the Africa Cup of Nations cnn.it/32uAz40
cnni

7:15 am ET January 24, 2022 RETWEET
Dozens of Chinese officials have been punished over their response to devastating floods that killed hundreds lastâ€twitter.com/i/web/status/1â€¦ee
CNNweather