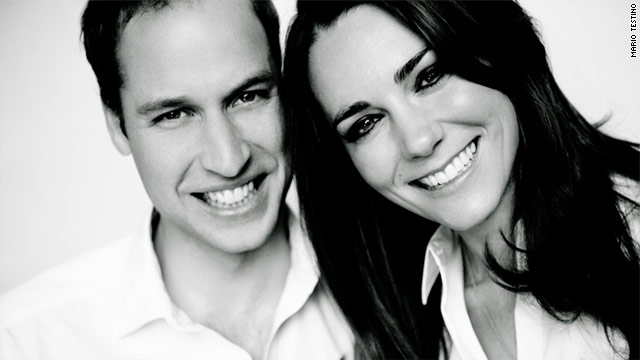 Buckingham Palace has released the official portrait of Prince William and Kate Middleton, as photographed by Mario Testino.
April 28th, 2011
11:06 AM ET

In 1997, the Peruvian fashion photographer snapped Princess Diana in various gowns at her home in Kensington Palace. The gowns were to be sold at a charity auction, and the photos were to be part of the program. Diana, who did not know Testino personally, was so enchanted by his work that she chose him instead of an official royal photographer for the project.

When the portraits appeared in the July 1997 issue of┬ĀVanity Fair, they were praised for their portrayal of the princess as stylish, confident and playful. A month later, Diana was dead and the portraits would become the last enduring images of the most photographed woman in the world.

Buckingham Palace on Thursday released the official portrait of DianaŌĆÖs son, Prince William, and bride-to-be Kate Middleton, as photographed by Testino. This is the second time Testino has photographed the couple since their engagement. The black-and-white images are fresh, classic and sophisticated. Diana would not have had it any other way.

She enrolled in her first college course in 1992, when her boss said heŌĆÖd reward her for getting an education. At the time, Vitzhum was a working mom with children ages 6 and 8 years old. As NPR reports, Vitzhum had no intention of getting a degree. Then, her father stepped in and made her promise to finish, even if she didn't finish until she was 50.

"I've been doing this so long, I don't think I'll know how not to do it," Vitzhum told Iowa State UniversityŌĆÖs news service. "It almost gives me anxiety to not know what I'm doing this summer."

She lives on a fixed income and cannot travel to Texas to visit her terminally ill son. Yet when Brison, 81, found more than $2,800 in cash in the parking lot of her Chicago-based doctorŌĆÖs office this month, she didnŌĆÖt even think of keeping it.

After she turned the money in to local police, a retired city worker named Lester Franklin contacted her. HeŌĆÖd dropped the money, had been contacted by police and wanted to give her a $500 reward.

Brison will use the money to fly to Texas to see her dying son. ŌĆ£I believe in the Book,ŌĆØ Franklin told the Chicago Sun-Times this week. ŌĆ£If you do good, something good happens to you.ŌĆØ

Fans of "The Office" will gather at the set one last time as the buffoonish Michael Scott appears in his final episode Thursday evening. NPR offered a summary Thursday of the actor's greatest lines as the lovable boss from hell:

ŌĆ£Everybody likes new inventions ŌĆö new technology. People will never be replaced by machines. In the end, life and business are about human connections, and computers are about trying to murder you in a lake.ŌĆØ

ŌĆ£To run an office, you need men and women. You know why? Because you need to have that crazy sexual tension to keep things interesting.ŌĆØ

ŌĆ£There is honor in losing, which is, we all know, completely ridiculous. But there is, however, honor in making a loser feel better.ŌĆØ

ŌĆ£Would I rather be feared or loved? Easy ŌĆö both. I want people to be afraid of how much they love me.ŌĆØ

Health officials in the United Kingdom are advising parents and schools to watch for Strep A infections following tŌĆtwitter.com/i/web/status/1ŌĆ”Jw
cnni