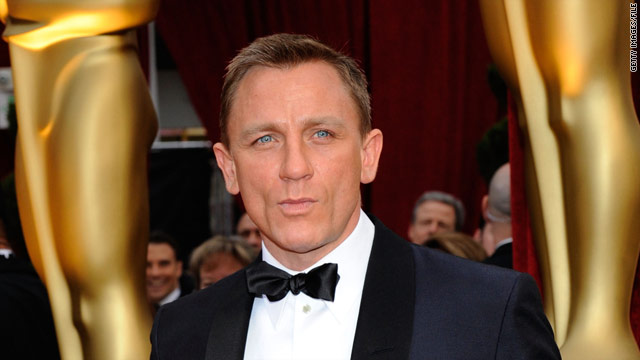 Daniel CraigŌĆÖs tux is replaced by a dress in a new public awareness video.
March 8th, 2011
11:34 AM ET

The short film, made by artist and director Sam Taylor-Woods, has a voice-over by Dame Judi Dench, who plays BondŌĆÖs boss, M, in the movies.┬Ā "We're equals, aren't we, 007?" asks DenchŌĆÖs voice. "Yet it is 2011 and a man is still likely to earn more money than a woman, even one doing the same job."┬Ā Dench continues to list discrepancies between the sexes in income, salary and career advancement, while Craig says not a word.┬Ā He disappears briefly and returns in drag, looking uncomfortable.┬Ā ŌĆ£So, are we equals?ŌĆØ Dench asks again. ŌĆ£Until the answer is yes, we must never stop asking.ŌĆØ

The Lebanon-born Maronite Christian author and activist ŌĆ£has become one of the most visible personalities on a circuit of self-appointed terrorism detectors who warn that Muslims pose an enormous danger within United States borders,ŌĆØ The New York Times reports.

Gabriel heads a group called ACT! For America which insists that Islamic militants have infiltrated the United States with the ultimate goal of imposing Sharia law throughout the world. ┬ĀAmong her target audiences on the lecture circuit: Republicans, defenders of Israel, Christian conservatives and the Tea Party. Gabriel is scheduled to appear on CNNŌĆÖs ŌĆ£In the ArenaŌĆØ tonight at 8 ET. ┬ĀŌĆ£I lost Lebanon, my country of birth, to radical Islam,ŌĆØ she told the Times in an e-mail. ŌĆ£I do not want to lose my adopted country America.ŌĆØ

A week ago, the Tony-winning director of ŌĆ£Spider-Man: Turn off the DarkŌĆØ told audiences at the 2011 TED conference that she and her production company were ŌĆ£in the crucible and the fire of transformationŌĆØ due to the $65 million productionŌĆÖs problems. TodayŌĆÖs New York Times reports that the producers are now in negotiations with Taymor that could end her involvement in the troubled Broadway show.

Accidents, alleged safety violations and criticsŌĆÖ backlash have marred the production, which has seen its official opening delayed five times already. Still, the musicalŌĆÖs previews bring in a reported $1 million in weekly ticket sales. Taymor told TED audiences that the show is trying to do what cannot be done in the two dimensions that are television or film. ŌĆ£Anyone who creates knows when itŌĆÖs not quite there,ŌĆØ Taymor said. ŌĆ£Where it hasnŌĆÖt quite become the phoenix or the burnt char. And I am right there.ŌĆØ

The rediscovery of the rare plant could help to revive Sierra Leone's floundering coffee industry, which was decimaŌĆtwitter.com/i/web/status/1ŌĆ”m7
cnni

9:01 am ET May 8, 2021 RETWEET
India's daily Covid-19 death toll surpassed 4,000 for the first time on Saturday, as the spiraling crisis is stretcŌĆtwitter.com/i/web/status/1ŌĆ”Bd
cnni

8:23 am ET May 8, 2021 RETWEET
A 2,000-year-old marble head of Augustus, Rome's first emperor, has been discovered in Isernia, an Italian town inŌĆtwitter.com/i/web/status/1ŌĆ”k2
cnni

8:03 am ET May 8, 2021 RETWEET
Boris Johnson cements one-party rule in England, but the United Kingdom looks as divided as ever. Analysis byŌĆtwitter.com/i/web/status/1ŌĆ”op
cnni