South Korean presidential candidate Ahn Cheol-soo announced Friday that he is dropping out of the race, clearing the way for fellow left-leaning hopeful Moon Jae-in to face Park Geun-hye, the candidate for the governing Saenuri Party.

Ahn had been working with Moon, of the Democratic United Party, to merge their presidential bids ahead of next month's election.

"I am giving up my presidential candidacy," South Korean news agency Yonhap quoted Ahn as saying. "From now on, Moon Jae-in is the single liberal candidate."

The race will determine who will lead South Korea, a key U.S. ally in Asia, for the next five years amid long-running tensions with the unpredictable, nuclear-armed North.

Little is known about Kim, who became the third generation of his family to lead his reclusive country when he assumed power following the death of his father, Kim Jong Il, in December.

Kim Jong Il, known as "Dear Leader" had ruled for 17 years after inheriting power from the country's founding father, Kim Il Sung, the eternal president and "Great Leader."¬ÝKim Jong Un was granted the title of "supreme leader." His age is still a source of speculation, though it's thought he's in his late 20s.

Recently the leader had been seen alongside a "mystery woman" at a Pyongyang theater to watch a performance of North Korea's Moranbong band. The display included a cast of Disney characters.

That outing wasn't her only high-profile appearance at the North Korean leaders' side.

The same woman was seen on state TV a few days later walking a few paces behind Kim as he toured Kumsusan Palace in Pyongyang, then standing to attention at Kim's side as they and top military officials paid tribute to his grandfather Kim Il Sung, North Korea's founding father, on the anniversary of his death.

The coast guard said two commandos boarded a Chinese ship and were investigating the crew when one person on board stabbed them.

The men were taken into custody, and the ship was taken toward Incheon Port, west of Seoul. The incident is under investigation, the coast guard said.

The South Korean coast guard has stopped hundreds of Chinese boats this year on suspicion of illegal fishing in the Yellow Sea.

Floodwaters in Bangkok have reached Don Muang Airport, one of the Thai capital's two main airports and home to the flood relief operation command, which may have to move to another location, according to the governor.

In addition to Don Muang, residents in five other areas should prepare for floods, move their belongings to upper floors and take shelter at evacuation centers, Governor Sukhumbhand Paribatra said in a news conference on Monday.

Thammasat University's gymnasium, which has been used as an evacuation center, is also flooded and without electricity and is itself being evacuated, the governor added.

As a remedy, about 4,000 people will be bused to Rajamangala Stadium in central Bangkok with the help of 300-400 volunteers, according to the governor.

In the east, the industrial estates of Lat Krabang and Bang Chan remained under threat, and volunteers were sought for help with sandbagging.

The governor urged the public not to panic and to follow his reports closely.

In an interview with CNN on Sunday Prime Minister Yingluck Shinawatra said authorities were trying to control the water levels by using all the dams and dikes to cope with an unusually heavy rainy season.

Protecting Bangkok was a priority because it comprises the economic heart of Thailand, she said. "But it doesn't mean we have no concern for the people who are suffering from the flooding," she added.

The decision to divert water through canals in Bangkok means parts of the city and its surrounding suburbs, such as Rangsit, are flooded.

Residents have resorted to moving out of flooded homes by boat or anything that could float - or wading through water with plastic bags of belongings balanced on their heads or pets tucked into clothes.

North Korea test-fired a short-range missile off its western coast in the middle of last week, according to Yonhap News Agency.

Quoting an intelligence source, Yonhap says Pyongyang launched a KN-06 short-range missile in an attempt to improve it and increase its range. 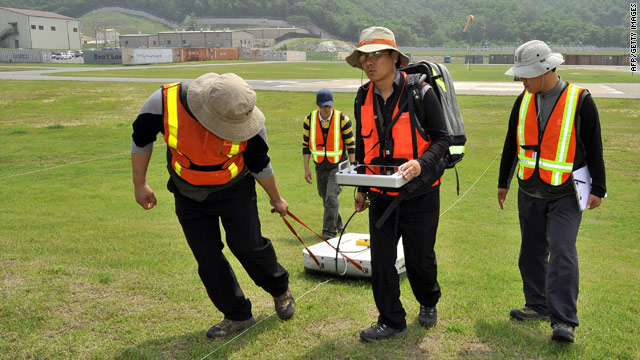 Ground-penetrating radar machines, which can search for objects up to 10 meters deep, are being used by the U.S. military on Camp Carroll military base in South Korea to check if supplies of Agent Orange was buried there.

Concern in the local community of Chilgok, 300 kms (186 miles) south of Seoul is clear.

One lone protester at the gates of the base holds a placard that reads: ‚ÄúThis land is not the graveyard of Agent Orange.‚Äù

Four U.S. veterans allege they were ordered to bury barrels of the toxic herbicide on the base in 1978 - allegations that have shocked South Korea.

The U.S. military insists it has no records of Agent Orange ever being stored or disposed of on this base, but it says records do show 65 drums of herbicides, pesticides, solvents and other chemicals were buried on Camp Carroll in 1978.

The military says those drums were dug up again a year later and prepared for shipment, but that's where the trail goes cold.

The U.S. military says their No. 1 priority is to find out where those drums ended up.

END_OF_DOCUMENT_TOKEN_TO_BE_REPLACED

Israel started building a barrier along its border with Egypt Monday. The Israeli government says it is to prevent illegal immigrants from crossing into the country and to stop smuggling.

The 240-kilometer-long, $370 million barrier will be part fence and part surveillance technology. The project was announced in January by Prime Minister Benjamin Netanyahu. "This is a strategic decision to ensure the Jewish and democratic character of the state of Israel," he said.

The Israeli military estimates around 5,000 infiltrators entered Israel over the past year as well as 1.3 tonnes of hash and 130 kilograms of heroin. Israeli human rights group Hotline for Migrant Workers estimates 90 percent of those crossing the border illegally are refugees from northern Africa. The rest are thought to be migrant workers or traffickers of drugs and women. The barrier could take several years to build across some difficult terrain. Israel's former ambassador to Egypt, Eli Shaked, told CNN there is nothing political about the decision to build it.

"It is a necessity. It had to be done a long time ago. It is not something directed at Egypt," he said.

Israel has already built a controversial barrier separating the West Bank from Israel.

Israeli settlers cheered Sunday's expiration of a moratorium on building new settlements in the West Bank as Israel's prime minister urged Palestinians not to walk away from newly resumed peace talks over the lapsed restrictions.

Israel "is ready to hold continuous contacts in the coming days in order to find a way to continue the peace talks between Israel and the Palestinian Authority," Israeli Prime Minister Benjamin Netanyahu said in a statement from his office shortly after the moratorium expired at midnight Sunday (6 p.m. ET). He asked Palestinian Authority President Mahmoud Abbas to "stay in the talks and, with me, continue on the road towards peace."

A contentious issue between Israelis and Palestinians that some say could derail Mideast peace talks is set to reach a milestone on Sunday.

Israel's moratorium on settlement construction in the West Bank is scheduled to end Sunday. Israelis and Palestinians are in the initial rounds of face-to-face peace talks, and Palestinians have said a restart by the Israelis could be reason enough to end talks.

A massive rally of settlers is expected on Sunday to show support for continued building.

Settlers and members of parliament are expected to "break ground" in the area. Bulldozers are also expected at the scene - a gesture to show that settlers are ready to begin building again.

CNN‚Äô@camanpourur remembers the legendary Larry King: ‚ÄúHe was the ultimate master of the interviewtwitter.com/i/web/status/1‚Ä¶n1SfnICT
cnni

4:31 pm ET January 23, 2021 RETWEET
President Biden is caught in an almost impossible vise as the nation reengages in the most polarizing kind of proce‚Ätwitter.com/i/web/status/1‚Ä¶8w
cnni

4:15 pm ET January 23, 2021 RETWEET
As horrible as the pandemic has been for small business owners, for some it has also shown in spades the compassion‚Ätwitter.com/i/web/status/1‚Ä¶fL
cnni

4:00 pm ET January 23, 2021 RETWEET
Third-party sellers on Amazon and other e-commerce sites are sending random products to people across the US as par‚Ätwitter.com/i/web/status/1‚Ä¶sd
cnni

3:31 pm ET January 23, 2021 RETWEET
The UK's decision to wait up to 12 weeks before giving people their second dose of the Pfizer/BioNTech coronavirus‚Ätwitter.com/i/web/status/1‚Ä¶Yi
cnni