At least 97 people are injured after a train derailed near the city of Toukh, according to Egypt's Ministry of Heal‚Ätwitter.com/i/web/status/1‚Ä¶C3

Three people were killed and two others were injured in a shooting in Kenosha County, Wisconsin, the sheriff's depa‚Ätwitter.com/i/web/status/1‚Ä¶Jp 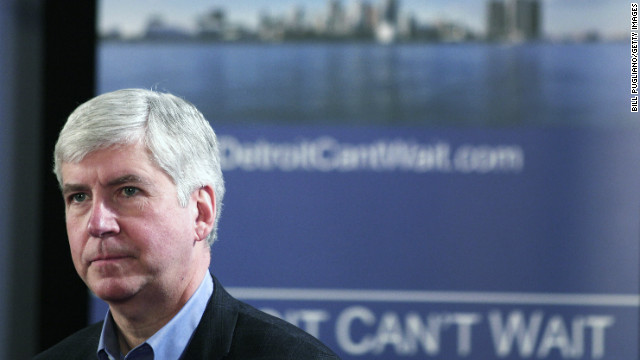 Gov. Rick Snyder earlier said Detroit lacked an adequate plan to resolve its $14 billion debt and that he would invoke a state law to appoint a manager to assume control of the city's government.
March 13th, 2013
09:57 PM ET

At 2 p.m. Thursday, the governor is expected to publicly recommend attorney Kevyn Orr step in to help Detroit manage its challenging financial situation, the source said. Members of Michigan's Local Emergency Financial Assistance Loan Board would make the official appointment.

The governor said earlier this month that Detroit lacked an adequate plan to resolve its $14 billion debt and that he would invoke a state law to appoint a manager to assume control of the city's government.

Obama to sign beam of One World Trade Center

With the under-construction One World Trade Center fast approaching its final height, President Barack Obama will visit the New York tower Thursday to get an update on its growth and help prepare one of the finishing touches.

Obama is expected to sign a beam that soon will be placed at the top of the tower, said Mike Pinelli, general superintendent of the Tishman construction firm.

"We're going to have our topping-out beam placed on the street" so Obama can sign it, Pinelli said. "It's typically signed by everybody on the project at some point, and then we're going to erect it shortly thereafter to signify the topping out of (the tower)."

Obama, accompanied by first lady Michelle Obama, is due to arrive at New York's John F. Kennedy International Airport in the late afternoon and at the construction site about 5:15 p.m. ET to get a briefing on the building, currently 104 stories and 1,300 feet tall - already the tallest structure in New York.

END_OF_DOCUMENT_TOKEN_TO_BE_REPLACED

‚ÄúEven if a red-flag law applied in this case, and Mr. Hole were barred from buying a gun from a licensed gun dealertwitter.com/i/web/status/1‚Ä¶6hGl
susancandiotti

10:54 am ET April 17, 2021 RETWEET
Nineteen people were on board a commercial ship when it capsized Tuesday during a thunderstorm off the Louisiana co‚Ätwitter.com/i/web/status/1‚Ä¶0A
CNNweather